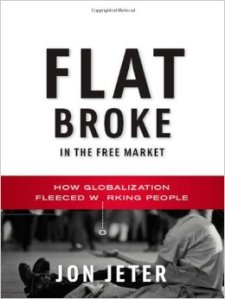 TARIAT—Jon Jeter’s book, Flat Broke in the Free Market: How Globalization Fleeced Working People is a damning indictment of the prevailing global economic policies imposed upon many developing nations by the IMF, the World Bank, and other international lenders. What their policies share in common is the prioritization of profit motive over human life. These economic policies have evolved into what has come to be known as neoliberalism and more recently, austerity policies. And they have wreaked havoc upon millions of people around the world.

Unfortunately, the murky realms of international trade and finance, and economics, more generally, are often misunderstood in the dominant news media reports fed to the public, which tend to emphasize esoteric monitoring of indices and vague descriptions of complex policies and dynamics, which say little of interest to most working class people and only serve to sanctify and romanticize vague notions of Wall Street stock investment fantasies. Jeter contextualizes the economic devastation wrought by the post-1990s pro-capitalist, anti-labor policies of the Washington Consensus and neoliberalism. Jeter brings the crisis home to his readers. Where some of us may have had unclear understandings about what globalization really entailed, Jeter’s book juxtaposes clear examples of policy decisions contrasted against the actual people we are introduced to by name, such as Rose Shanzi. We come to find we have so much in common with people halfway around the world from us, who are affected by economic policies, which are enacted by industrialized nations in our names.

Jeter takes us away from the usual view of globalization from above and takes us intimately into the lives, on the streets and in the homes, of some examples of the countless lives, which are adversely affected by the pro-capitalist policies of neoliberal austerity. Rose Shanzi is a street vendor in Zambia struggling to make 75 cents per day by selling tomatoes to provide the daily necessaries of life for her family of five children. But that’s more than 50% above the expected earnings which she ordinarily makes. Of course, Rose must face much competition, since all of Rose’s neighbors are facing similar plights. Rose must compete with some 4,000 vendors like her, also trying to sell tomatoes on the street. “The doctrinaire opening of industrial markets to all comers has laid waste to local economies. (Jeter 5)” This boots-on-the-ground view from below would be the alternative view of globalization, which traces the full human cost of globalization and economic integration, when it’s effected through the perverse lens and unrealistic assumptions of neoliberal austerity.

Jeter describes globalization as being one half of “the twentieth century’s twin imperialist movements”, alongside colonialism (Jeter xviii). Both imperialist movements, argues Jeter, colonialism and globalization, have the same goals: “service to the empire and to their own social class” (Jeter xvii) And to do this, the “architects” of globalization, according to the dictates of elites, “found their own boogeyman—inflation—and used it to bludgeon the poor and the working class in the same manner. (Jeter xix)” Jeter writes: “Like colonialism, globalization is fundamentally extractive, a process of ‘accumulation by dispossession’ as David Harvey”, a geographer and political economist, “describes it” (Jeter xviii). The difference between colonialism and globalization, writes Jeter, “is miniscule” (Jeter xviii). This is an interesting analysis, particularly citing Harvey’s description—Harvey being an expert on Marx’s Capital: A Critical Analysis of Capitalist Production—of “a process of ‘accumulation by dispossession’” because we can almost map the function of exploitative and predatory class relations of the capitalist mode of production at the individual level between employer and employee, or exploiter and exploitee, onto the national level, with developing nations playing the subjugated role of the employee and the industrialized nations playing the dominant role of employer. Jeter allows us to see clearly the all-encompassing domination over human life that is the capitalist mode of production.

In order to operationalize this mapping of capitalist exploitation we observe at the individual level onto predatory international trade and finance relations, Adam “Smith’s ideological heirs at the World Bank and the International Monetary Fund (IMF) sat down with foreign finance ministers to hammer out trade deals and loan conditions, beginning in the 1970s, the first order of business was inevitably the willy-nilly disassembly of tariffs that protect domestic industries from competitive pressures. (Jeter 5)” This would be akin to the attacks on labor at the individual level, wherein the capitalist owners strip away the rights of workers, and then impose increasingly extractive social relations. The same dynamic seems to operate at the international level of the capitalist mode of production.

Jeter offers readers many solutions by way of the various examples of resistance exemplified by the many personalities and communities to which we are introduced. For example, in Brazil, where extreme poverty and class biases against the poor have led to sterilization procedures being performed upon women in perverse attempts at combating poverty, local communities have stood up with “anti-sterilization” protests. The resistance has yielded legislature to require that women be over the age of 25 before giving consent to undergo sterilization. Jeter’s book, Flat Broke in the Free Market clarifies and elucidates the topic of globalization in a broad way. It is an excellent book.