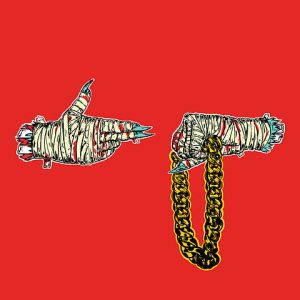 LUMPENPROLETARIAT     Killer Mike provocatively puts the question to the lumpenproletariat, the thugs, and all the bangers:  When are ya’ll gonna unite and fight the powers that be?  Although he couches it in different linguistics, the sentiment’s the same.  Killer Mike reproaches the “vicious” of society, rapping:

“Liars and politicians, profiteers of the prisons/
The forehead engravers, enslavers of men and women/Includin’ members of clergy that rule on you through religion“.

And, of course, Zack de la Rocha always brings the conscious lyrics with his rhythm and flow.  To close out his only verse, Zack de la Rocha invokes the proletariat:  The only thing that close quicker than our caskets be the factories.  El-P‘s always dope, too.  Here, he reminds me of MC Ren (an all-time favourite) in a mindful state.  Also, the entire track reminds me of Saul William‘s “Black History Month“, from the rapid-fire vocal sample (in this case, invoking 2 Live Crew‘s “Get It Girl”; Run the Jewels uses Zack’s vocal for the rapid-fire hypnotic hook) to the Bonhamesque drum rhythms.  I meant to put this up, since before (since Tom first showed me this video; shout out to Modesto CopWatch).  This is an intense video in its cinematography, soundtrack, and acting, visceral.

“Close Your Eyes (And Count to Fuck)” by Run the Jewels

[Killer Mike (El-P):]
Fashion slave, you protestin’ to get in a fuckin’ look book
Everything I scribble’s like The Anarchist Cookbook
(Look good, posing in a centerfold of Crook Book)
Black on black on black with a ski mask, that is my crook look
How you like my stylin’, breh? Ain’t nobody stylin’, breh
‘Bout to turn this mothafucka up like Riker’s Island, breh
Where my thuggers and my cripples and my bloodles and my brothers?
When you niggas gon’ unite and kill them police, mothafuckas?
Or take over a jail, give those COs hell
The burnin’ of the sulfur, God damn I love the smell
Like it’s a pillow torchin’; where the fuck the warden?
And when you find him, we don’t kill him, we just waterboard him
We killin’ ’em for freedom ‘cos they tortured us for boredom
And even if some good ones die, fuck it, the Lord’ll sort ’em

[El-P (Killer Mike):]
We out of order, your honor, you’re out of order
This whole court is unimportant, you fuckers are walkin’ corpses
I’m a flip wig synonym, livin’ within distortion
I’ll bite into a cyanide molar before you whores win
I’m a New Yorkian, I fuck for the jump
I wear my Yankee so tilted I actually walk with a hunch
Look at Mikey, I think he likey, we are sinister sons
(Aye, we the type to beat the preacher with a grin and a gun)

[El-P (Killer Mike):]
A wise man once said, (“We all dead, fuck it”)
Just spit it disgusting youngin’, and hold your nuts while you’re gunnin’
I listened, tatted a sentence on my dick last summer
Now, I’ll never get that phrase off my brain; it’s no wonder
I’m here to buy hearts, I got hundreds, honey
The cheaper the parts, the better buy for the money
I’m trained in vagina whisperin’, glistenin’
Waitin’ for their christenin’, I know the neighbors can’t help but listen in
A dirty boy who come down on a side of diss[ide]nce
I can’t even relax without sirens off in the distances
Not shittin’ you, little buddy, this fuckin’ island’s a prison
The only silence I have is an act of conjugal visitin’

[Killer Mike (El-P):]
My solitary condition’s preventin’ conjugal visits
Go mane and missin’ my misses; they keepin’ me from my children
Conditions create a villain, the villain is givin’ vision
The vision becomes a vow to seek vengeance on all the vicious
Liars and politicians, profiteers of the prisons
The forehead engravers, enslavers of men and women
Includin’ members of clergy that rule on you through religion
(So strippin’ kids to the nude and then tell ’em God’ll forgive ’em)

[Zack De La Rocha:]
It’s De La on the cut, liftin’ 6 on your stitchy crew
I’m miles ahead of you, you can sip my bitches brew
My battle status is burnin’ mansions from Dallas to Malibu
Check my résumé, your residence is residue
Call her a skin job and my honey dip’ll backflip for you
You playin’, God your eye sockets, she gon’ rip in two
We sick of bleedin’ out a trace, spray a victim, you
Done dyin’, Phillip AK Dickin’ you
With clips in the bottom, we dippin’ from Gotham
Yes, eclipsed by the shadows, a dark dance to the coffin
I’m a fellow with melanin, suspect of a felony
Ripped like Rakim Allah, feds is checkin’ my melody
Yes, aggressively tested we’ll bump stretchers and penalties
Dump cases with face and the cop pleas when we seizing a pump
With reason to dump on you global grand dragons
Still pilin’ fast, plus Afghani toe taggin’
Now, they trackin’ me and we bustin’ back, see
The only thing that close quicker than our caskets be the factories

“Close Your Eyes (And Count to Fuck” lyrics © Aniyah’s Music

[RUN THE JEWELS lyrics are property and copyright of their owners.  “Close Your Eyes (And Count to Fuck)” lyrics are provided here for educational and personal use only.]

[Image entitled “RunTheJewelsRTJ2” by Source. Licensed under CC BY 3.0 via Wikipedia.]