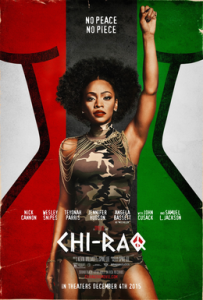 LUMPENPROLETARIAT—With the complaints against the all-white 2016 Oscars making headlines, we might wonder which movies may have actually been snubbed by the nearly all-white, and all-male, Academy of Motion Picture Arts and Sciences (AMPAS).  Of course, this inquiry necessitates screening as many of the 2016 Oscar-nominated, and not nominated, contenders as possible.

This worthy contender, although not nominated for anything during the 88th Academy Awards contest for 2015 films, is directed by Spike Lee, who was deemed worthy of an Academy Honorary Award.  Chi-Raq has been described as a “modern day adaptation of the ancient Greek play Lysistrata by Aristophanes, set against the backdrop of gang violence in Chicago.”  When in Chicago visiting family in 2015, I made it a point to see the poorest areas of Chicago.  I was shown much of Chicago, including neighbour hoods, such as Englewood, which is featured in Chi-Raq.  This film captures Chicago, as a symbol for any American city, in, both, its majesty and its travesty.

Chi-Raq is an “American satirical musical drama film” based on Aristophanes‘ Lysistrata, a Classical Greek comedy play in which women withhold sex from their husbands as punishment for fighting in the Peloponnesian War.”  As I watched the film, I must admit, as the notion of a sex strike appeared, and as the protagonist Lysistrata appeared, Aristophanes never came to mind.  More influential to actualising the concept, in my mind, were the poetic lyrics of Stevie Wonder [1]:

But, in any case, Academy Honorary Award winning film director Spike Lee seems to be discouraged from producing the type of provocative films he’s been creating and directing more recently.

Yet, after some screenings and comparing the work, one can see how Spike Lee and Kevin Willmott may very well edge out most, if not all, of the nominees for Best Screenplay.  And one might see how Angela Bassett, as Miss Helen in Chi-Raq, may very well beat some, if not all, of the nominees in the Best Actress category.  But, perhaps, there really is a white supremacist culture, which discriminates against films populated with people of colour, which precludes a powerful actor, such as Angela Bassett from being fairly recognised for her work by the Academy.  Or maybe not.  Check out this and other 2015 films and decide for yourself.

“Capitalism is a failed system.  Capitalism does not permit an even flow of economic resources.  With this system, a small privileged few are rich beyond conscience.  And almost all others are doomed to be poor at some level.  That’s the way this system works.  And, since we know that the system will not change the rules, we are going to have to change the system.”  Martin Luther King, Jr. in a communication to Andrew Young, one of his associates

LUMPENPROLETARIAT—Today, on free speech radio, KPFA [1], broadcast an interesting conversation with Smith College Professor Jennifer Guglielmo on Italian anarchists and their relevance to, and importance for, today’s struggles for socioeconomic justice.  Listen here.

Dr. Guglielmo is the author of Living the Revolution: Italian Women’s Resistance and Radicalism in New York City, 1880-1945 (Chapel Hill: The University of North Carolina Press, 2012).  Dr. Guglielmo has also co-edited, alongside Salvatore Salerno, Are Italians White? How Race Is Created in America (Routledge, 2003).  This is an interesting study of how the fallacy of race is manipulated to preserve class divisions and maintain existing power relations.  Many of us so-called Hispanics experienced this in the USA when we ‘became’ white after the 2000 census [2], when we were informed by the state that we were henceforth white.  This coincided with a national discussion and, perhaps, panic around ‘Hispanics’ outnumbering whites by 2050.  In California, it seemed ‘Hispanics’ had already outnumbered whites.  So, the notion of race and passing for white, is a long-standing mechanism for concentrating and maintaining racial power over people of colour, as Dr. Guglielmo explained on Against the Grain.

AGAINST THE GRAIN—Of the Italians who immigrated to the US, many were drawn to anarchism, labor militancy, and radical feminism. Jennifer Guglielmo explains.

Learn more at AGAINST THE GRAIN.
‘
***
‘
[1]  Free speech radio KPFA (94.1 FM, Berkeley, CA) was founded by pacifist-anarchists, who were conscientious objectors to WWII.  Hence, we have the name of KPFA’s subsequent national network, Pacifica Radio.
‘
[2]  It seems this ethnic/’racial’ (phenotype) re-labelling (i.e., cooking the census books) also took place during the 2010 census.  However, your author vividly recalls a 2000 census poll worker coming to the Monte Diablo Apartments in San Mateo, California.  The census worker asked about my ethnicity/’race’ (phenotype).  And, as I explained, she informed me, based on my parents’ immigrant heritage from Mexico, that I was now “white” in the eyes of the state.  She said that was now the only appropriate box for Chicanos and other descendants of Latin Americans to check.
***
On time management:  Published during lunch break.