All of the Americans, who were shocked or surprised by Wednesday’s actions by Trump loyalists in Washington D.C. and in other locations across the nation, ought to read Dr. Peter Dale Scott’s deep history of the United States, particularly The Road to 9/11 and The American Deep State: Wall Street, Big Oil, and the Attack On American Democracy.  It’s important that Americans understand exactly who is in charge.  For a powerful summary of Trump’s presidency, cf. “American Mythology: The Presidency of Donald Trump”, a seven-part podcast series by the Intercepted podcast, narrated by Jeremy Scahill. Historian: White Terrorist Groups Attacked Democracy During Reconstruction, They Are Doing It Again 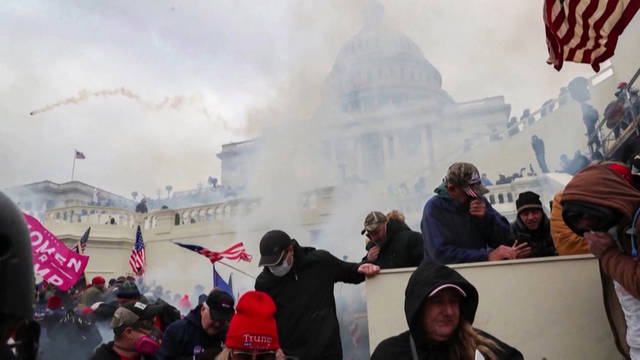 0:08 – Trump incites violent white mob at the US Capitol, one day after Georgia Democratic victory tips Senate to Democrat majority

Daniela Urban is Executive Director of the Center for Workers’ Rights and special counsel to Legal Aid At Work (@LegalAidAtWork).

Robert Evans (@IwriteOK) is an investigative journalist with the news website Bellingcat.

1:25 – Was the storming of the Capitol yesterday just a media stunt?

David Pierce (@pierce) is editor at large for the tech news site Protocol.

Aminah Elster (@AminahElster) is campaign and policy coordinator with the California Coalition for Women Prisoners.

1:46 – Continuing our series hearing from the family members of people who are incarcerated inside Central California Women’s Facility (CCWF). Our reporter Lucy Kang (@ThisIsLucyKang) spoke with a woman who only wanted to be identified as “Lisa” about her daughter who recently tested positive for COVID while incarcerated at CCWF. We’re not naming “Lisa” or her daughter’s identities to protect against potential retaliation.

The California Coalition for Women Prisoners is calling for better conditions inside CCWF, here’s more information on the call to action.

Keri Blakinger (@keribla) is a reporter with the Marshall Project – Thousands of Sick Federal Prisoners Sought Compassionate Release. 98 Percent Were Denied, she reports.

07:00, WBAI & WPFW > common broadcast, speakers were describing details of a woman shot by Capitol Hill police and past history of their brutality.  By contrast, yesterday, said one speaker, Capitol Hill police were holding doors open for the protestors, some of whom were flying Confederate flags.  One woman earlier today (Thursday), perhaps a prof on DN, said not even during the Civil War, did the South manage to fly the Confederate flag in the White House.  But yesterday they did.

FBI is sending out tweets, asking for help in identifying yesterday’s protesters. One speaker questioned whether America can ever have a police force, which is not linked to white supremacist ideology. “There is no equal protection under the law.”

07:15 PST, KPFA:  One speaker reported that Capitol Hill police refused to hold a press conference to answer for enabling the disruption, disorder, and violence, as Trump loyalists marched into the Capitol building.

The KPFA guest was making interesting points. But UpFront host Brian Edwards-Tiekert changed the subject to the Georgia election.  Oh, well.  Georgia is an important topic, as the state has been flipped and has elected its first black senator. So, too, perhaps, is horse-race commentary about the rigged two-party system, or two-party dictatorship.  But, somehow, the broader issue of American fascism seems more urgent.  I dunno.  That’s just me.

07:22 PST, KPFK > Experts interviewed Maurice Cook(sp?) and Zahara Simmons(sp?) react to yesterday’s actions in DC. Then, host also wants to get their take on the Georgia Senate election.

07:25, KPFK > on two-tiered justice system  re: DC actions wedn.  Pre-planning?  Adelle Stan, et al yesterday commented that there’s no way the Trump loyalists could have navigated their way through the underground labyrinth of hallways without assistance or having been enabled.  KPFK guest also said she’d “been to the Capitol many times” and said “it’s very hard to get into the Capitol.”  She noted that members of Congress were considering siding with Trump to stop the electoral vote count yesterday.

KPFK > Sojourner Truth > mobs of Trump loyalists, even kids, on the streets with pro-Trump paraphernalia.  Personally, I saw the same thing, as I looked out my front window after dinner last night.  The kids were riding by taunting and calling out pro-Trump slogans, as they rode down the middle of the street on their bicycles.  That’s definitely Brown Shirt behavior, as various observers noted yesterday.

Many experts agree there is a double standard….  So, now what?  INTERPOL?  International Court?

Protestors or terrorists?  Yesterday, Sunsara Taylor or a colleague made an excellent argument that there’s no moral equivalence between, say, the Proud Boys and the Black Panthers march on the Sacramento Capitol building.

0745, KPFK > ‘Dr. Pinel Joseph, ‘law enforcement is not the friend of black people.’  Then, one man called in and said that the calls for a bipartisan solution to the problem of the Trump loyalists’ antidemocratic attacks must involve concessions from the right, “not the left”, as the Dems “have been kowtowing all along.  The next man to call in said that America is “being set up for a race war.”  “You’re being gaslighted”, he urged.

One vaccine has “nanoparticles”, Null discussed the details.  Null also discussed a bill in NY, which could mandate covid vaccines, to the point of coming to your house or apartment.  Also, the vaccines still require the vaccinated individuals to mask and social distance. Yet, many people think vaccines will free them from the masking and social distancing.

Null cited Catherine Austin Fitts about “the Great Reset”. (Cf. Unpacking Mr. Global.)  Small businesses will be decimated, smashed.  Big business will further consolidate.  Someone yesterday commented that many prisoners are being released, which is good for them and the families waiting at home.  But it will also mean an even more depressed job market.  Where’s Dr. Kelton’s, and MMT”s job guarantee programme when you need it, right?

10:15 PST, WBAI > Caller “Sanaan”, a man, boldly raised the obvious historical parallel, which many of us are afraid to mention.  The storming of the Reichstag in Germany and also the Proud Boys being reminiscent of the Brown Shirts.  Gary Null minced no words earlier during his broadcast.  But, of course, Pacifica, et al have “banned” him.

11:00 PST, KPFA > The Talkies [TW]. Kristina Aanestad spoke with s doctor about the science of the new covid variant and the realities our medical system and society can expect in the near future, and what to do about it.

12:10 PST, KPFK is playing interesting music, a bit new agey-sounding. This is typical of KPFK and the stressed out nature of life in SoCal or something. That’s the impression I get.

12:19 WPFW (DC):  sultry jazz music; they must be really stressed out over there, too

13:00 PST, Meanwhile, KPFA was broadcasting their usual sleepy edition of Cover to Cover with Richard Wolinsky.  Well, I can’t lie some episodes of CTC do hook me in.  Today’s topic seems to be about Italian films, John Houseman’s play of Native Son.  And they did mention the CIA and film noir.  So, that’s cool.

13:00 PST, WBAI > DN! News Headlines > 13:18 PST, up next > Sunsara Taylor, “Insurrection Response Special”, ‘a fascism mob broke through and raided […] and it was spearheaded by the man in the White House. There’s no way around it.’

Antisemitism was also represented among the Trump loyalists, as some were wearing shirts with 6MNE or something, which is a slogan saying the ‘six million Jews killed by Nazis was not enough’.  Also, one elected rep in the U.S. House of Representatives joined the Trump loyalists, got on mic, and quoted Hitler. The congresswoman said Hitler was right about one thing: If you get the youth, you can be victorious.

13:25 PST, meanwhile WPFW must be super-stressed out over here.  They playin’ a whack ass soft jazzy version of The Delfonics’ classic, “La La Means I Love You”.  I dunno.  I can’t lie.  They played some good jazz after that.  But WBAI has their finger on the pulse. Let’s go back to Sunsara Taylor.

13:55 PST, WBAI > News Headlines:  only about a dozen arrests. [Sunsara Taylor, et al reported earlier on Pacifica Radio that, by contrast, about 14,000 anti-Trump, pro-BLM protestors in the summer of 2020.]

c. 14:20 PST, interesting interview with Casey Layman, author of How To Slowly Kill Yourself and Others in America

15:00 PST, WBAI > News Headlines [TW]  Rep. Lindsey Graham, “Yesterday, they could have killed us all.” But no mention of police opening doors and ‘standing down’.

KPFA > Hard Knock Radio > upon closer listen, maybe it was an updated remix version of “This Is America”.  16:52 PST, from death row, a communique from political prisoner Mumia Abu Jamal addressed the plight of prisoners, such as “Maroon”, who are at risk of “death by incarceration.”  Mumia’s call was recorded by Noelle Hanrahan for Prison Radio.  16:56 PST, another very apros po musical selection, “My Petition” by Jill Scott.

17:00 PST, KPFA > [TW] Flashpoints > audio of Trump speech, “My only goal was to defend the integrity of the vote.”  Sorry, but that’s bullshit because the entire electoral vote recount was baseless, and should never have even taken place, as many expert observers commented yesterday.  Trump closed with, ‘Our journey is only beginning.’

17:05 PST, Flashpoints > Host, Dennis Bernstein spoke with Prof. Francis Boyle (Univ. of Chicago Law), a noted human rights lawyer.  “We have a seditious conspiracy going on here. […] And, so, we have to take this very seriously.”  Boyle said, ‘Congress should have been in emergency session all day. Instead, they went on recess until January 20th.’  Wow.

Prof. Boyle: ‘We have a prima facia case for sedition by Trump, et al,, coordinated by Holly and Cruz, et al. But we need more investigation on that to confirm the co-conspirators. But there was no security at all. It was like a 9/11 stand-down scenario. Democrats are just as feckless as the liberal Germans after the burning of the Reichstag.’

Next Flashpoints guest addressed the ongoing prison hunger strikes in America.  He also described various abuses and inhumane conditions in Alabama prisons, citing a letter of plea from a prisoner published on the SF Bayview Newspaper recently. “We have historical dialectical materialism.  There is no rule of law.”  ‘The evidence on the ground,’ he said,’is telling us we’re in trouble.’

17:50 PST, KPFK > [TW] Background Briefing. At the end, Ian Masters reported an upcoming LSB meeting. Pacifica Radio bosses, said Masters, have been running roughshod over KPFK and are trying to ouster or “fire” Sonali Kolhatkar (Rising Up) and him.

19:00 PST, KPFA > Apex Express > on “the racist internment policy” against the Japanese in the USA during WWII.

Throughout his life, Trump has fanned the flames of white supremacy. He owes his one-term presidency in large part to his cynical exploitation of racism and fear.