LUMPENPROLETARIAT  Admittedly, we were all stunned by the electoral defeat of neoliberal Hillary Rodham Clinton last night, even those of us who didn’t vote for her.  Of course, we must have a complete ballot audit and confirm the ballot counts.  And with this, another presidential election in which the loser is the candidate with the most votes from the people, we must ask ourselves: When will we finally do away with the antiquated Electoral College?

In any event, we must open up our political discourse beyond the neoliberal status quo, which is hoisted upon us by the antidemocratic collusion between the Democratic and Republican parties, which preserves the corporate domination of government and the war profiteering military-industrial complex, which has possessed our military.  To help us do this, veteran award-winning journalist John Pilger has joined Flashpoints host Dennis Bernstein on free speech radio for a much-needed post mortem on this glorious occasion of the splendid defeat.  Listen (and/or download) here. [1]

[Working draft transcript of actual radio broadcast by Messina for Lumpenproletariat and Flashpoints.]

“Well, Donald J. Trump [laughs] will be the next president of the United States, despite his long history of stiffing workers and project partners, a host of bankruptcies, evidence that he’s a serial abuser of women, and amidst revelations that the alleged billionaire didn’t pay income taxes for some 18 years.  Indeed, a whole bunch of liberal and Democratic folks are scratching their heads as to how it could be that Trump beat back the Clinton machine, that out-fundraised Trump by many times.

“Joining us to talk about this on this special edition of Flashpoints is a good friend of this programme, a filmmaker, columnist, writer, government critic, critic of all governments, John Pilger.  He was born in Sydney.  And he is now based in London.  Pilger has reported from all over the world, covering numerous wars, notably Vietnam.  When he was in his 20s, he became the youngest journalist to receive Britain’s highest award for journalism; that’s the Journalist of the Year.  He got that twice.  He’s won an Emmy.  He’s done a lot of other work.  His most recent book is Hidden Agendas and the New Rules of the World.  And he has a piece, that’s going around now:  ‘Inside the Invisible Government: War, Propaganda, Clinton, and Trump’. 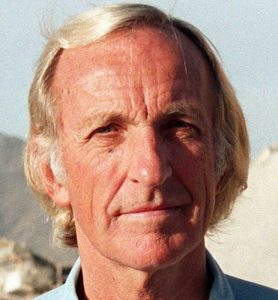 DENNIS BERNSTEIN:  “Well, it’s good to have you with us.  And I’m gonna ask you later on about the new film, which I’m very excited about.”

DENNIS BERNSTEIN:  “But let’s begin with last night’s victory over Clinton by Trump.  Were you surprised?  What do you think was at the core of the Trump victory?” (c. 2:50)

JOHN PILGER:  “Do you know I wasn’t surprised?  Brexit, undoubtedly, helped this.  I wasn’t surprised.  I think I’m quite surprised by how decisive his victory is.  But I must say I felt rather angry.  And I think we probably expended enough anger on Trump.  He’ll, no doubt, provide us with plenty of material coming up.

“But I think it’s time for people, so-called liberal people, to look in the mirror.  Who created Trump?  Who created this disastrous election, so-called campaign.  In my opinion, the enablers of all this was the liberal class in the United States.

“The liberal class has refused to acknowledge, in its arrogance, the huge disaffection and discontent among ordinary people, and painting them in such broad strokes, as being—what did Clinton call them? Deplorables?  And irredeemable?”

JOHN PILGER:  “—you know, Clinton was an extremely dangerous prospect, dangerous because she represented a war-making, rapacious status quo.  The status quo would have, actually, altered slightly under her.  It’s my understanding—in fact, I believe—that she might have provoked a very major war over Syria and with Russia.

“We don’t know what Trump will do.  We have to, now—putting aside all the parodies and the abuse—we have to, now, be thinking in terms of the practicalities.  He’s running the show?  What will he do?

“But I think before we do that, again, we have to reflect on all the myths.  I heard a Harvard professor on the BBC, on the very night before the count began, talk about the hard left in the Democratic Party and how she would have to embrace the idea of Bernie Sanders and what he stood for.  You know, this kind of drivel and misrepresentation has been everywhere.  The media, personally—and I’m speaking of journalists—produced, probably, the most unfettered propaganda I can remember at any time.  In my career, this has been the worst.

“There was no serious attempt to really analyse and examine either candidate and what they stood for.  Trump was dismissed as a demon, with all the salacious stuff around him—undoubtedly, some of it true and all of that.  But he was a serious candidate.  He was never analysed.  And that’s why there’s a great surprise and a great shock.  And it’s something, that liberal America has to start coming to terms with itself.

“We had Barack Obama presented seriously as a candidate of hope and real change.  He was nothing of the kind.  He was, in fact, a warmonger.  He’s got four wars going at once.  He conducted an international terrorist campaign using drones.  He has prosecuted more whistleblowers than any president in American history.

“And, you know, when you think of Trump’s disgraceful remarks about throwing people out of the country and building a wall, who is the deporter-in-chief?  The liberal Barack Obama.  He has deported more people than any other president.

“So, all of these facts have been lost.  And they represent a real crisis for the opposition in the United States, the broad opposition.  Barack Obama’s great achievement was that he killed off the anti-war movement [and the Occupy Movement] because people, doe-eyed from the beginning, thought that Barack Obama was some kind of genuine inspirational liberal, instead of the warmonger, that he is.

“I think those—there’s a lot of people, who are going to be listening to your programme.  They need to hear this, so that there’s a real opposition to Trump and to what he’s going to do—we don’t know what he’s going to do—but, also, an understanding of his constituency.  The majority of Americans eligible to vote voted for him.  That’s a fact, that has to be come to terms with, we have to come to terms with.”  (c. 8:13)

JOHN PILGER:  “I don’t know.  I mean he’s said contradictory things on the Middle East, very contradictory.  He’s been bellicose, in one sense.  But, in another, he’s been a thread, that has run through Trump’s speeches.  And that is that he wants to do a deal with Russia.  He doesn’t want to fight them.  It’s ironic because, as we speak—and I read only the other day—the hundreds of thousands of NATO troops, American, British, and others, in effect, massing on the borders of Russia.  Now, what will happen to them?  What will happen to that provocation?  That’s a very, very dangerous provocation.

“Now, will Trump defuse it?  Will he step back?  I don’t know.  It’s interesting; he has spoken against NATO.  In fact, for the Republican Convention platform, his people were asked to remove one issue.  And that was that NATO would receive renewed shipments of weapons.  And they were quite specific about removing that.  That was pointed out to me by Professor Stephen Cohen, who’s been very interesting on this at New York University and taken a lot of criticism for taking seriously, or at least analysing some of the things, that Trump has said over Russia.

“But, you know, we never know if he meant it.  He’s contradicted himself.  So, now we’re about to find out.”

DENNIS BERNSTEIN:  “[chuckles]  You’re listening to Flashpoints on Pacifica Radio.  I’m laughing a little bit because I think I’m a little bit afraid of the potential, in terms of where this could go.  I’m not sure if I would be more frightened if Hillary was elected.  A lot of people are furious with me for taking this perspective.  But I, as you’ve outlined—Iraq, Libya—given the history—you know—Honduras—Hillary Clinton, her hand are full of blood.”  (c. 29:32)

“On this glorious occasion of the splendid defeat…”