1984, Prince, Prince and the Revolution, Purple Rain, When Doves Cry 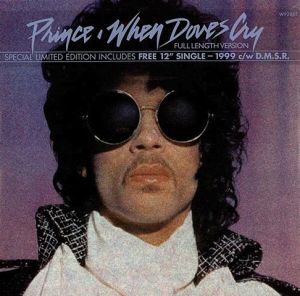 LUMPENPROLETARIAT—Dig, if you will, a picture of you and I engaged in a kiss…

“When Doves Cry” by Prince and The Revolution

“When Doves Cry” dominated the consciousness, or the proverbial id, of the USA for a hot minute.

The B-side was the cult fan favorite “17 Days“, which was originally intended for Apollonia 6‘s self-titled album. A 12-inch single issued in the UK included the album track, “17 Days”, and two tracks from Prince’s previous album, 1999, namely the title track and “D.M.S.R.” The entire title, “17 Days (the rain will come down, then U will have 2 choose, if U believe, look 2 the dawn and U shall never lose)”, is now the longest titled flipside of a Hot 100 #1, with 85 letters and/or numbers.

[The cover art for When Doves Cry by the artist Prince is associated with a cover art copyright, which is believed to belong to the label, Warner Bros., or the graphic artist(s).  The entire cover is used in this article because the image is cover art, for which the entire image is needed to identify the product, properly convey the meaning and branding intended, and avoid tarnishing or misrepresenting the image.  The copy is of sufficient resolution for commentary and identification, but lower resolution than the original cover.  Use of the cover art in this article complies with Wikipedia non-free content policy and fair use under United States copyright law as described above.]

[The cover art image is used for identification in the context of critical commentary of the work, for which it serves as cover art.  It makes a significant contribution to the user’s understanding of the article, which could not practically be conveyed by words alone.  The image is placed in the infobox at the top of the article discussing the work, to show the primary visual image associated with the work, and to help the user quickly identify the work and know they have found what they are looking for.  Use for this purpose does not compete with the purposes of the original artwork, namely the artist’s providing graphic design services to music concerns and, in turn, marketing music to the public.]