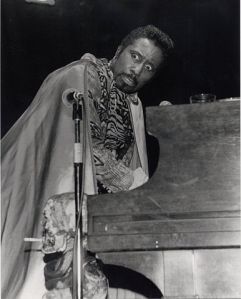 LUMPENPROLETARIAT—Jalacy Hawkins (18 JUL 1929 – 12 FEB 2000), better known by the stage name Screamin’ Jay Hawkins, was an American musician, singer, songwriter and actor.  Famed chiefly for his powerful, operatic vocal delivery, and wildly theatrical performances of songs, such as “I Put a Spell on You“, Hawkins sometimes used macabre props onstage, making him an early pioneer of shock rock.

Stage theatrics aside, “I Put a Spell On You” has truly stood the test of time, as one of the great songs from the American Songbook.  Beyond the Creedence Clearwater Revival cover (1968), which has become a staple of classic rock radio, the Nina Simone version (1965) and the Natacha Atlas version (2001) are two favourites.