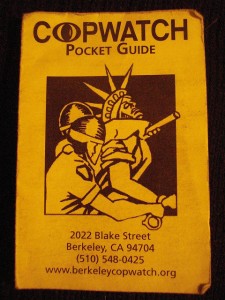 LUMPENPROLETARIAT—The officers of the peace disturb the peace, again.  Grandmother, mother, and sister Yuvette Henderson was brutally gunned down in Emeryville, CA on 3 FEB 2015.  But she was shot in the back of the head, whilst being fired upon over half a dozen times, by Emeryville police.

On Sunday, 12 APR 2015, a vigil was held for Yuvette Henderson.  Henderson’s brother, Jamison Robinson, mourned the murder of his sister, who had just recently become a grandmother, as he spoke before the community gathering of supporters, who were outraged at the murder by cops.  Yuvette Henderson’s family and supporters decried allegations against her character in the media.  They dispute the charges Yvette Henderson was armed.

Yuvette Henderson had been accused of stealing at the Home Depot home improvement and construction big-box store (on the Emeryville, CA side of the city line with Oakland, CA).  When Yuvette Henderson tried to flee from a Home Depot security guard, the guard called local police, who didn’t hesitate to recklessly open fire in the busy street.  According to Liberation News reporter William West, “Russ Whitehead, was in [a] vehicle at the time of the shooting and nearly lost his own life as bullets shattered his window. He survived only because he instinctively ducked when he heard gunfire.”

On Saturday, 21 FEB 2015, “[d]ozens of #BlackLivesMatter protesters forced Home Depot in Emeryville to close its doors for several hours […]” as reported by CBS SF/KCBS.  Demonstrators held a sit-in in “front of the store for five hours, marking the time Henderson’s dead body was on the street.”  KCBS reported:  “According to the organizers, Henderson was shot with three different weapons, one of which was an AR 15 semi-automatic rifle.”

At the Sunday vigil, 12 APR 2015, Yuvette Henderson’s family and supporters were calling for the Emeryville and Oakland Police Departments to “release the video detailing the police execution of Ms. Henderson”.

Needa Bee (with Anti Police Terror Project), complained about a lack of due process in properly investigating the brutal killing of Yuvette Henderson in broad daylight, citing a failure by authorities to produce a police report.  The cop who killed Yuvette Henderson was wearing a body camera, but said he forgot to turn it on before he killed Henderson.

And video footage from the Home Depot store has been withheld.  Anita Johnson (KPFA, Berkeley, CA) asked Needa Bee, representing Anti Police Terror Project, why the group thought the police and Home Depot were withholding video evidence of the events:

“We feel because they are trying to cover up the situation.  You know.  What cops usually do is they cover up—they protect their own.  And, so, we’re very clear that Emeryville Police Department and Oakland Police Department, they’re protecting the police officers involved.  And, with Home Depot, we believe that there is some criminal activity that happened from what we understood.  We also have an anonymous source who works at Home Depot, who gave us a written testimony of what they saw.  And, so, what they saw—based on this worker there—is she was assaulted.  She just sustained a head injury.  She asked for paramedics.  The paramedics never came.  She asked the store to call paramedics.  And the paramedics never came.”

ANITA JOHNSON:  “And who was she assaulted by?”

NEEDA BEE:  “By the security guard at Home Depot.  We believe that they’re covering their tracks because they could have a criminal and a civil case against them.  And, obviously, the police will have a lawsuit against them as well.  We know that we will be able to prove that there was foul play done on her and that her murder was unjust.”

LIBERATION NEWS—On Feb. 3, 38-year-old Yvette Henderson joined the list of victims of racist police murder in the Bay Area. Yvette, a mother of two, was in a Home Depot located on the Emeryville side of the city line with Oakland. A store security person accused her of trying to steal. Henderson left the store and the security team called the Emeryville police, claiming that Henderson had been confrontational when she was accosted and that they believed she had a gun on her.

By the time two Emeryville cops found Henderson, she was on the Oakland side of the city line, and was trying to wave down a city bus. The bus did not stop for Henderson and the police cornered her in front of a parked vehicle and shot at least seven times, killing her.

The owner of the car Henderson was standing in front of, Russ Whitehead, was in the vehicle at the time of the shooting and nearly lost his own life as bullets shattered his window. He survived only because he instinctively ducked when he heard gunfire. Not only did the cops kill Henderson, but they put Whitehead’s life at risk to do so.

SAN JOSE MERCURY NEWS—SETTING THE RECORD STRAIGHT (publ. 2/6/2015, page A4) A story incorrectly reported the number of times a woman was struck by bullets in a fatal police shooting in Oakland. Police said officers fired seven shots but have not said how many times Yvette Henderson was struck.

(5 FEB 2015) OAKLAND—The 38-year-old woman who was shot and killed by Emeryville police Tuesday outside of Home Depot pointed a revolver at a security officer after being caught shoplifting, then tried to carjack at least three cars at gunpoint before pointing the weapon at police, the department said Wednesday.

Police say Home Depot security officers spotted the woman stealing knives and confronted her as she walked out of the Emeryville store at 3838 Hollis Street. That’s when the woman reached into her purse, shook off a towel and pointed a revolver at the officers, who backed off.
The woman fled and tried to carjack several cars outside a storage facility, before encountering two police officers and pointing a gun at them, according to Emeryville police Chief Ken James.

Police fired at least seven shots at the woman; officials did not say how many times she was struck. She was pronounced dead at the scene. One of the officers involved in the shooting was wearing a body camera, but did not turn it on until after the incident, James said.

A group of activists protesting the police shooting of 38-year-old Yuvette Henderson chained themselves together, blocking the entrance to the home improvement store.

Police say Henderson was shot because she threatened officers with a gun and refused to put the weapon down. Officers confronted Henderson after she stole knives from Home Depot and tried to carjack vehicles to get away, police reported.

But protesters are skeptical of the police explanation and want Home Depot to release security footage of the incident. They called the shooting an example of the “extrajudicial police kills of black people across the country,” according to a statement put out by the protesters.