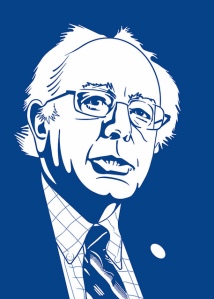 LUMPENPROLETARIAT—Forbes has published a footnote on Senator Bernie Sanders’ collaboration on economic policy with heterodox economists from the University of Missouri-Kansas City, such as Dr. Stephanie Kelton.  Dr. Kelton has been hired by Senator Bernie Sanders to be the chief economist in the Senate Minority Budget Committee.  Could Bernie Sanders inject progressive spirit into the Democratic Party’s agenda?  Not if Tim Worstall has anything to say about it.

Forbes contributor Tim Worstall is opposed to the policy space (or the greater government spending flexibility), which is opened up by the revolutionary approach to macroeconomic policy, modern money theory (MMT), which shows us how, and why, we can afford to end involuntary unemployment as we know it.  Except Tim Worstall never mentions the Job Guarantee programme, which would stimulate our economy.  Instead, he conjures up ridiculous fears of bloated military spending.  But capitalist imperialism is a vice of the right, not the left.  Worstall borders on intellectual dishonesty in his attempts to discredit MMT, although he admits that he is, ultimately, unable to refute it. [1]

FORBES—[12 JAN 2015]  The idea that Modern Monetary Theory might actually become vaguely mainstream, even an influence on how the Republic is governed, entirely petrifies me. It’s not actually that I disagree very much with the economics that is being laid out in MMT: indeed, I’m terribly tempted to agree that they’re actually correct in much of what they say. Rather, it’s what it will do to the political process if they do gain real policy influence. For at present there does have to be some link, however vague or tenuous, between how much money the government takes in from all of us and how much money the government spends on giving prizes to all. The basic innovation of MMT is to point out that this no longer has to be so: and that’s simply not a tool that I want politicians of any stripe to have available to them.

Dylan Matthews has the story that has me hot and bothered:

President Obama’s biggest problem in the Senate is obviously its new Republican majority, but opposition from the left wing of the Democratic caucus appears to be growing too. Most prominently, Sen. Elizabeth Warren (D-MA) has clashed with the White House on a key Treasury Department position and the CRomnibus spending package. But new budget committee ranking member Sen. Bernie Sanders (I-VT) is poised to break dramatically from traditional Democratic views on budgeting, from Obama to Clinton to Walter Mondale and beyond.

His big move: naming University of Missouri – Kansas City professor Stephanie Kelton as his chief economist. Kelton is not exactly a household name, but to those who follow economic policy debates closely, tapping her is a dramatic sign.

If you want all of the grubby details of MMT then I recommend that piece and those it links to. I’ll just give a pencil sketch here.

It’s most certainly not obvious that MMT proponents are all barking mad or anything. Jamie Galbraith (who I’ve had one or two very limited interactions with) is certainly a reasonable guy. And his insistence that a budget surplus, despite the ribbing he gets about it, is in fact economically contractionary doesn’t seem to have anything wrong with it. Budget deficits are fiscally expansive, a surplus is fiscally contractionary, if there’s any one statement at the heart of Keynesianism that’s it. I might differ on the desirability of a surplus at times but not on that basic point about one being contractionary. My disagreement being that the old standard Keynesianism was based on the idea that at times we want the government to be contractionary. Not as a means of paying down the debt or anything but as just general good management of the economy. Sure, let’s add to aggregate demand in a slump but the flip side of that coin is that in the boom we want to temper things. Just as the old complaint about central banking goes (“the central banker’s job is to remove the punch bowl just as the party gets going” by raising interest rates) a budget surplus is the fiscal equivalent, just part of moderating both the booms and busts to which capitalism is prone.

So I’m certainly not thinking that the MMTers are over there with David Icke and whispering about the Grey Aliens or anything.

And their basic outline about money creation is true as far as I can see. If you’re a country with your own central bank you can print as much money as you like. And sure, you could indeed finance government just by printing more money. Print money, spend it, hey presto, you’ve financed government.

[1]  Forbes contributor Tim Worstall attempted to cite Milton Friedman in order to substantiate his claim that government spending for public purpose will necessarily be inflationary.  But this ignores the fact that government spending can be used like a thermostat for the economy to heat it up, or cool it down, as heterodox economists, such as Dr. Kelton, have long explained:

“But what about inflation from running the economy too hot?  MMT doesn’t recommend that you run the economy too hot.  MMT recommends using deficits to bring the economy up to full employment, not to push it beyond.  This is a common criticism, that we deal with from our critics who say we want huge deficits and beyond full employment and we never want them to stop and they’ll always be large, and, therefore, we must be insane.

“So, they mischaracterise us, so they can mock us.  Functional finance calls upon the government to maintain full employment and price stability.  We are as concerned with inflation, as anyone.  But we don’t view it as a serious problem when the economy is operating far below full employment with lots of available unused resources.  The government has plenty of space to push the economy before inflation should become a relative concern.”