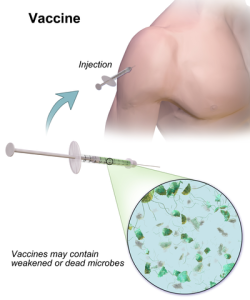 DR. SUZANNE HUMPHRIES:  “The history of polio is very dark.  It’s very strange.  And it really began the beginning of the vaccine religion in the United States, as far as I’m concerned, because, once the public supported the polio campaign, all vaccines kind of followed.”

“Dr. Suzanne Humphries is a medical doctor, internist, and board-certified nephrologist, currently in private practice.  Roman Bystrianik is a medical researcher and author.

“Currently, the California legislature is fast-tracking two vaccine senate bills.  SB 277 will eliminate the personal belief and religious exemptions from vaccinations required for children to attend public and private school.  SB 792 will require CDC-prescribed adult immunisation of child care workers, with the exception of flu vaccine.

“Today, we review some of the history of disease and vaccination covered in Dissolving Illusions:  Disease, Vaccines, and the Forgotten History.

DR. SUZANNE HUMPHRIES:  “Thank you for having me back, Bonnie.”

BONNIE FAULKNER:  “And, Roman Bystrianik, thank you for joining us.”

ROMAN BYSTRIANIK:  “Thank you for having us.”

BONNIE FAULKNER:  “You are co-authors of the book, Dissolving Illusions: Disease, Vaccines, and The Forgotten History.  How did the two of you come together to write this—shall we call it—history of disease and the practice of vaccination?  Dr. Humphries, let’s start with you.”

DR. SUZANNE HUMPHRIES:  “Well, I think it all started when Roman heard me on Gary Null’s show when I was floundering in my very early months trying to talk about polio because early on I realised that polio and smallpox were the two things, that were tossed at me whenever somebody had a doubt about what I was saying about flu shots to my sick patients.

“So, I went deep into polio, thinking:  Polio is still in the consciousness of people today.  So, let me go with polio.

“And, to me, smallpox was really interesting.  But it was so long ago.  So, I really focused on polio.  And Roman, meanwhile, had been focusing on smallpox.

“So, he heard me on Gary Null talking about polio; and he said: Ha! That’s the person I need to write my book with.  [SNIP].”

During this week’s broadcast, the discussion addressed: the recent measles outbreak in California; the increasing number of virus strains, which must be infused into vaccines; forced vaccinations; the ‘discovery of the human brain’s lymphatic system; and the role of the human immune system, or immunological response, to viruses, which confounds public perceptions of viruses and vaccines.

Where the public has perceived vaccines in modern history as having been responsible for a reduction in various viral fatalities, such as the measles virus, Dr. Suzanne Humphries argues that the historical record indicates the incidence of viral infection has not declined, but the mortality rates have declined.  In other words, the same numbers of people are getting infected with those same viruses, but less people are dying from them.

Dr. Suzanne Humphries argues, as do other medical professionals critical of conventional vaccines, that our modern-day decrease in deaths attributed to previously terrifying viruses is more the result of improved sanitation (i.e., indoor plumbing, clean bathrooms), hygiene, and nutrition than it is due to widespread public vaccination.  Dr. Humphries presents interesting technical information and raises various provocative ethical questions around civil liberties, personal autonomy, and state intervention into private medical decision-making, all of which are worthy of further inquiry.  Listen (or download) here. [1]

“The immune system tests, that doctors use on patients today are pretty much the same as the tests they used 50 years ago.”

“Dr. Suzanne Humphries is a medical doctor, internist, and board-certified nephrologist, currently in private practice.  She is co-author of Dissolving Illusions: Disease, Vaccines, and the Forgotten History.

“Today, we review some elements of Dr. Suzanne Humphries’ video, Honesty Versus Policy, available on her YouTube channel, with a special emphasis on vaccine efficacy.  She continues to dispel the mythology surrounding vaccination.

DR. SUZANNE HUMPHRIES:  “Thank you, Bonnie.  And thank you for having me back on the show.”

[Bonnie Faulkner asks Dr. Humphries to go over her medical training and background again for listeners who missed their previous, or first, Guns and Butter broadcast.]  (c. 5:01)

“So, that is one of the risks of not taking a vaccine.  It’s that you are more likely to get more of the common diseases.

“Now, I’m not one to say:  The vaccines don’t do anything.  They actually do do something.  They can prevent the transmission of a disease.  And, in the case of the measles, how they do it is by giving children an injection of a modified measles virus, a modified virus.  So, you’re basically giving them a specialised case of measles in order to prevent the wild measles.

“And these vaccines only last for a short period of time.

“But the facts are that Measles in Disneyland was an insignificant spark in a teacup.  And it was blown up into a draconian hysteria-packed flame.  And, I believe, it was in order to energise what is an already planned, nationwide wildfire-type legislation, which primarily destroys the rights of people to make personal choices for themselves and their own families.

“So, who was affected by the California outbreak?  I say, potentially, the whole world because the rest of the world tends to adopt USA policy.  And, while I was abroad, I heard discussions taking place in Australia and New Zealand.  There is talks in northern Europe, now, about countries considering mandating vaccinations.  And, so, it will probably happen in many of those countries.  (c. 6:20)

“And the weirdest thing to me is that we live in the most highly vaccinated world ever.  And that includes California.  And many people are surprised to learn that California has the measles-mumps-and-rubella vaccination rate of approximately 96.1% among pre-kindergarten children.  It’s the highest that it’s ever been.  And it, actually, exceeds the national arbitrary goal of 95%.

“And I recommend that people go online and read a blog by Edward Yazbak, Vaccination News. [2] And, in there, he goes through a lot of the breakdown of what really is going on in the country.  And what he says, also, is that it’s a sad reality that no one mentioned that over 1,500 autism cases may have been diagnosed during the 24 first days of that measles outbreak and that, according to the 2014-2015 California Department of Public Health Child Care Immunisation Assessment results, that 89.4% of the 434,000 children two years to four years and eleven months of age enrolled in reporting child care facilities received all required immunisations.  There’s a 0.56% of children with permanent medical exemptions.  And there’s only a 2.67% personal belief exemption rate.  And that is, actually, down from the rate in 2013 and 2014.  (c. 7:45)    [SNIP]”

THE DAILY MAIL—[22 APR 2016]  Why De Niro is backing the MMR doctor hounded out of Britain: Actor believes triple jab risks are being covered up by pharmaceutical giants after his son ‘developed autism overnight’ when he had vaccination

Robert De Niro is widely reckoned to be the world’s trickiest celebrity to interview. He will sit looking morose and mumble monosyllabic answers. Any question about his private life will be met with the sort of thinly veiled menace he provides so perfectly in his film roles.

But there is one subject, as painfully private and sensitive as one can imagine, on which he has been more than happy to talk in recent days — about how his 18-year-old son, Elliot, suffers from autism.

Although the 72-year-old has previously hinted about raising a son with special needs with his wife, Grace Hightower, it wasn’t until recently that he opened up, after his Tribeca Film Festival in New York provoked controversy by featuring a new ‘anti-vaccination’ documentary called Vaxxed.

In two interviews with NBC’s Today show, De Niro, the festival’s co-founder, explained why he had first asked for the film to be included but then said it would not be shown following protests.

Next, in a second about-face, he made clear he was deeply upset about the decision to withdraw the film and urged people to watch it.

Becoming increasingly emotional, the impassive film star revealed that he and his wife believe their son developed autism overnight after receiving an unidentified vaccination jab — understood to be MMR (against mumps, measles and rubella, three common childhood illnesses until the Seventies) — as a baby.

‘I, as a parent of a child who has autism, I’m concerned,’ he said. ‘And I want to know the truth. I’m not anti-vaccine. I want safe vaccines.’

He added: ‘There are many people who will come out and say, ‘I saw my kid change overnight. I saw what happened. I should have done something and I didn’t.’

‘There is a link and they are saying there isn’t and there are other things there . . . There’s more to this than meets the eye, believe me.’ The Hollywood star’s trenchant views are an important voice on an issue that has been a huge medical controversy for the past 18 years.

Significantly, the documentary’s director, British doctor Andrew Wakefield, became a hate figure after he claimed in 1998 he had found evidence the MMR triple vaccine caused irritable bowel syndrome and autism in children.

Learn more at THE DAILY MAIL.

“Among the views provided will be those of the publisher and Editor Sandy Gottstein (aka Mintz) on a variety of vaccination related issues and news, including commentary on breaking news items. Her long-running column can be found HERE

“What all parents deserve is good information, untainted by conflict of interest, on the safety of vaccines. They deserve the right to choose whether or not to vaccinate their children. And those that choose to vaccinate, after weighing the known benefits and risks, deserve safer vaccines.”