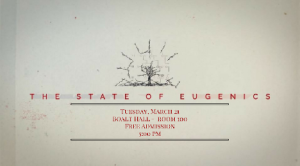 LUMPENPROLETARIAT—A new documentary entitled The State of Eugenics (2016) will be screened at UC Berkeley‘s Boalt Hall, School of Law, tomorrow night (Tuesday, March 21st, 2017, 5-7:30pm). [1]  The film’s director, a self-described filmalist (i.e., filmmaker/journalist), Dawn Sinclair Shapiro will be in attendance at UC Berkeley for a Q&A as well as part of an event sponsored by the UCB Department of Gender and Women’s Studies.  The film is

about the eugenic sterilization program [in] North Carolina [which] ran between the 1930s and 1970s.  The film documents how that long-forgotten program was brought back to light by researchers and journalists, resulting in a pitched political battle over compensating victims.

Questions of genetic enhancement and reproductive rights are controversial because they touch upon issues of women’s rights, discrimination, race, and class.  The eugenics movement became negatively associated with Nazi Germany and the Holocaust when many of the defendants at the Nuremberg trials attempted to justify their human rights abuses by claiming there was little difference between the Nazi eugenics programs and the U.S. eugenics programs.  Lumpenproletariat acquaintance (c. 2010-2012) Sabrina Jacobs has interviewed the film’s director Dawn Sinclair Shapiro.  Listen (and/or download) here. [2]

The State of Eugenics (2016) directed by Dawn Sinclair Shapiro

Film Screening: The State of Eugenics

Please join us at 5:00 pm on March 21, 2017 at UC Berkeley for a free screening of The State of Eugenics, the just-released film about the eugenic sterilization program North Carolina ran between the 1930’s and 1970’s. The film documents how that long-forgotten program was brought back to light by researchers and journalists, resulting in a pitched political battle over compensating victims.

Comments and Q&A after the screening by filmmaker Dawn Sinclair Shapiro and University of Michigan Professor Alexandra Minna Stern.

Pizza and refrehsments will be provided at no additional cost!

This is the second event of the 2017 Being Human in a Biotech Age Film Series at UC Berkely.

Film is captioned but we are not able to provide live captioners/interpreters.

The State of Eugenics shines a light on a sorry and often-forgotten chapter in American history— the forced sterilization of thousands of Americans thought to have “undesirable” genetic make-ups. The film follows researchers and journalists who delved into dusty archives to bring North Carolina’s extensive eugenics program into the sunlight. When the journalists succeed in connecting those files to living survivors and the vast network of perpetrators are revealed, a grassroots movement begins, tirelessly insisting the state confront its nefarious past. The documentary— four years in the making, brings into focus the human tragedy that unfolded behind closed doors for decades and gives voice to survivors who believed their poverty would leave their stories untold and their pain unrecognized.

Across four decades, the state of North Carolina sterilized more than 7,600 people— men and women, adults and adolescents. The program ended in the 1970’s, dismantled after a landmark lawsuit filed by the ACLU on behalf of survivor Nial Ruth Cox. This sordid history had been largely forgotten until December 2002 when the Winston–Salem Journal published a five-part series, “Against Their Will,” that examined in stunning detail North Carolina’s eugenics program.

Historian Johanna Schoen and reporters John Railey, Kevin Begos and Danielle Deaver put the horrors of forced sterilization back in the headlines, prompting Governor Mike Easley to apologize for his state’s eugenics policies. That apology, however, provided only cold comfort to survivors. The film interweaves the stories of crusading journalists and contrite politicians with the inner thoughts of eugenics survivors: Nial Ruth Cox, Willis Lynch, and Dorothy Mae Grant. The three had been sterilized as teenagers by a state Eugenics Board that had become increasingly aggressive about advocating for sterilization as the answer to problems of entrenched poverty.

As survivors’ stories unfold in the film, a new effort to atone for the wrongs done to them emerges— monetary compensation.

Dawn Sinclair Shapiro began her journalism career working for the award winning news magazine program, CBS News Sunday Morning.Dawn has worked as a Producer, Associate Producer, Writer, Online Editor/Writer for Tribune Broadcasting, CNBC, MSNBC, Dateline NBC and Chicago Public Radio. She directed, wrote and produced her first feature length documentary, “Inside the Handy Writers’ Colony”, which aired nationally on PBS on October 23, 2008. In addition to the summer 2010 release of The Edge of Joy, current projects include post-production on Dialogues with China, a character study of world-renowned curator of contemporary Chinese art, Wu Hung.

Alexandra Minna Stern is a Professor of American Culture at the University of Michigan, and hold appointments in the Departments of History, Women’s Studies, and Obstetrics and Gynecology. Currently she directs the Center for Latin American and Caribbean Studies and co-direct the Reproductive Justice Faculty Program based at the Institute for Research on Women and Gender. Her research has focused on the history of eugenics, genetics, society, and justice in the United States and Latin America. She also has written about the history of public health, infectious diseases, and tropical medicine. Through these topics, she has explored the dynamics of gender, sexuality, race, ethnicity, disability, social difference, and reproductive politics.

For more information about the film The State of Eugenics and to watch the trailer, visit https://vimeo.com/191200802.

Learn more at A RUDE AWAKENING.

[1]  For more information on the documentary film, The State of Eugenics, and eugenics in general, see:

[Image of UC Berkeley film screening of The State of Eugenics used via fair use.]