Before a capacity audience at St. John’s Presbyterian Church (Berkeley, California), Project Censored‘s Mickey Huff introduced the great civic leader, and five-time U.S. presidential candidate, Dr. Ralph Nader for a critical discussion of political activism, lobbying congress, and other strategies for political reform.  Dr. Nader is currently on tour, giving at least one presentation per day, throughout the San Francisco Bay Area and northern California this week, before moving on north to Portland, Oregon and Seattle, Washington.  The theme of Dr. Nader‘s presentation is defined by the spirit of his latest book, Breaking Through Power: It’s Easier Than We Think (2016).  The evening’s proceedings were filmed by a professional camera operator (not to mention countless smartphones).  So, there will likely be audio and/or video made available of this event in future. (We provide a rush transcript below.)  See BreakingThroughPower.org.  Tune in to free speech radio KPFA for more. [2]

(opening speaker):  “[snip]  We wish to thank St. John’s Presbyterian Church for this space tonight.  And I also want to acknowledge the congregations in the wider community.  Now, the First Congregational Church, they are hoping with the [inaudible].  KPFA has a very special relationship with the [inaudible] community [inaudible] and feel a special solidarity with them.

“KPFA wrote a letter expressing [inaudible] and solidarity with the congregation.  And KPFA has stepped up [longer] and sponsored [inaudible] for the church.

“So, that church and that community are in [our] hearts.

“A shout out to KPFA’s volunteers and, in particular, the outreach volunteers, who are, faithfully, here, at all our events.  And we thank them [inaudible]. [4]

“So, once again, tomorrow evening the Middle East Children’s Alliance presents, and KPFA co-sponsors, a courageous Ali Abunimah, who will present ‘Turning Point for the Palestine Solidarity Movement: Can Israeli Apartheid Really Be Defeated?‘.  This event takes place at 7pm at the First Congregational Church in Oakland, not Berkeley, Oakland.  (c. 2:08)

“Undoubtedly, you have had tonight’s event, as well as Wednesday’s coming event, on your calendars for some time.  Today, and after tomorrow, October 19th, KPFA hosts Chris Hedges, who will discuss, with David Talbot, Chris’ new book, Unspeakable: On the Most Forbidden Topics In America.  This much anticipated event takes place at the Martin Luther King Middle School in Berkeley [California].  And it commences at 7:30pm.  We’ll have a rich and deep exchange between these two powerful intellectuals.

“Coming up next week, October 25th, you have the opportunity to hear Roxanne Dunbar-Ortiz and Dina Gilio-Whitaker present “All the Real Indians Died Off”: And 20 Other Myths [About Native Americans].  This event takes place right here, at St. John’s [on October 25, 2016 at 7:30pm].  Please do check the KPFA website and check the dates and venues for these events.

“So, coming to you, tonight, Ralph Nader presents [snip].  (c. 3:48)  [Speaker mentioned that there will be a question and answer segment at the end in which Mickey Huff will select from audience questions a few questions for Dr. Nader to address.]

“At the end of the evening, Ralph will sign your copy of your book right here on this stage.

“So, let me tell you a little bit about Mickey [Huff, who will introduce Dr. Ralph Nader].  There’s much to be known about Mickey [such as the fact that he’s a pretty nice musician].  Mickey Huff is the director of Project Censored, a media research, education, and advocacy initiative, that started in 1976 and is currently housed at Diablo Valley College in California.

“Project Censored has expanded to approximately two dozen university and college campuses across the U.S. and has trained over 2,500 students.  And, if you look around, and if the average age of tonight’s audience is a little bit younger, it’s because Mickey Huff has brought several of his Diablo Valley students here tonight [hopefully, not just for extra credit]. [5]  We welcome them here tonight.  [audience applause]  (c. 4:55)

“Mickey is currently a professor of social science and history at Diablo Valley College, where he is co-chair of the History Department.  We, as listeners of KPFA, probably know Mickey as the co-host of the Project Censored show, which airs weekly on KPFA on Friday afternoons [snip].  (c. 5:26)

“And, as of this month, 2016, Mickey is the director of the newly-launched Global Critical Media Literacy Project, a social justice and education project.  [snip]  (c. 6:19)

“Tonight, it’s a, certainly, an honour, really, and a privilege to be here with all of you and, uh, in Berkeley, California.  And, again, it’s a great honour to be here to, both, introduce and to be in conversation with one of the most important and iconic figures in American history.  And I don’t believe that’s a hyperbolic statement.  I think back at so many things, that Ralph Nader has done in over the last half century, and it’s things, that [teams] of people haven’t been able to do or accomplish, or, or just haven’t wanted to.  And I want to build a little bit on what was just being said.  Of course, it’s kind of a momentous year, here.  And it is the 40th anniversary of the Project Censored and the Media Freedom Foundation. [audience cheering, applause] (c. 7:37)  [snip]   40th Anniversary Summit.  And you’re all invited.  We have a lot of great people, like David Talbot, Mnar Muhawesh.  (c. 7:54)  [snip]  (c. 13:10)

“But Ralph Nader wrote the foreword for our 2015 book.  It’s so gracious for him to do.  And, in it, he had a little, really,  I could say, humorous story.  Of course, it’s not really funny.  But he was talking about how reporters live in a climate of control.  And these cultures promote self-censorship.  And that’s often the case with the White House Press Corps, as they follow these kinds of conformist, self-censorship, kind of habits.

“And these same inhibitions operate on the campaign trails for presidential and congressional candidates.  Establishment reporters fall in a rut of self-restraint and boredom and wait for gaffs.  Even when third-party candidates, or citizens, point out crucial questions, that should be asked, including why candidates unreasonably restrict access by reporters, Ralph writes, or why third-party candidates aren’t allowed in the debates or why they’re relentlessly attacked by the corporate media.  (c. 14:11)   [snip]  (c. 17:30)

“And you’ve been very kind.  But the last thing I want to do, as you leave this gathering, is to say to yourself and to others:  Now, wasn’t that an interesting presentation?  [audience laughter]  I want you to go out with the collective fervour, that’s already in you, enflame it, as a kind of light, that will recapture our Congress, to whom we have given immense constitutional authority, that beats up against us. 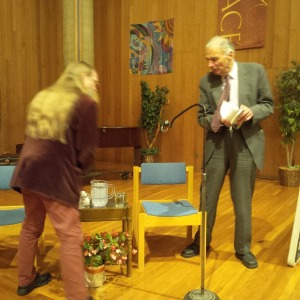 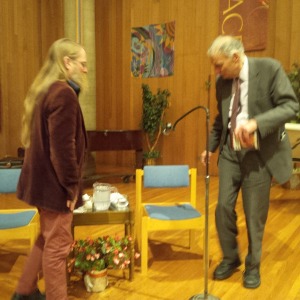 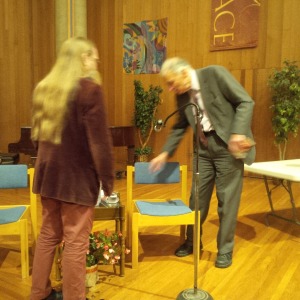 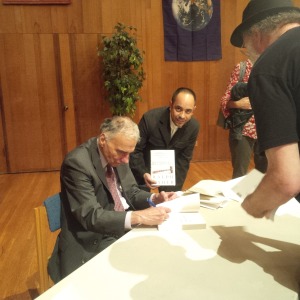 Dr. Ralph Nader and Messina, who got to ask Dr. Nader a question about MMT (modern money theory).  (But, understandably, Dr. Nader couldn’t agree to being quoted for Lumpenproletariat, as he was not familiar with the website. 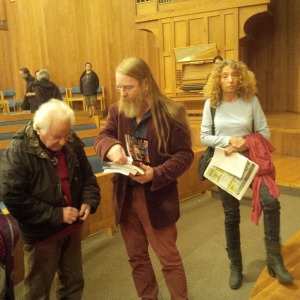 Project Censored‘s Mickey Huff is always a very accessible and kind person with all KPFA listeners.  This is especially commendable as it is not true, frankly, of all KPFA broadcasters, or broadcasters, generally. 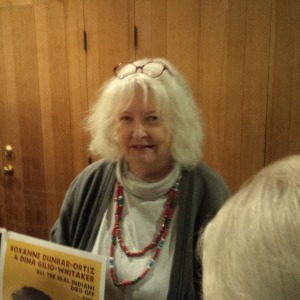 Perrine Kelly, a longtime stalwart KPFA volunteer is photographed here tabling for KPFA in the lobby of St. John’s Presbyterian Church.  Perrine always has a wry smile for your author whenever we meet around the KPFA community throughout the years.  At one point, post-2007, SaveKPFA, the dominant faction at KPFA had “it in for me”.  Sometimes one may sing:  You’ll never know the hurt I suffered/Nor the pain I rise above/And I’ll never know the same about you/Your holiness or your kind of love/And it makes me feel so sorry…  But that will never be the case with Perrine.  She knows intimately the good and the bad, which we encounter in our collective struggles for free speech media and free speech community.  She is a fine KPFA friend.  It’s always nice to see her and all dedicated KPFA volunteers, who work thanklessly to make KPFA shine as brightly as possible.

[2]  Your author attended in the hopes of posing a question or two to Dr. Ralph Nader, which I did.  Unfortunately, we cannot quote Dr. Nader, as he was ‘not familiar with Lumpenproletariat.org.’  [We’ll contact Dr. Nader for a follow-up question or two.]  Attending KPFA events is also the only way, sometimes, to get the full information presented, as KPFA does not, cannot, or will not, air the full audio of their events for various reasons.

We’ll expand our transcription of the proceedings as time constraints allow.

[3]  $15 (advance tickets).  $18 (door).  This event was sold out; by Monday afternoon, tickets were no longer available online.  Only limited tickets would be available at the door on a first come, first serve basis.  (We got a pair of tickets at the door at approximately 19:34 PDT.  So, we missed the name of the first speaker.  After she concluded her remarks, Mickey Huff delivered a 12-minute introduction of Dr. Ralph Nader.  Dr. Nader was on by about 19:57 PDT.)

[4]  Indeed, it was nice seeing KPFA friends, Perrine Kelly and her partner, the concert violinist, tabling for KPFA in the lobby as well as other friends, such as Virginia Browning, another KPFA stalwart, throughout the audience.  These folks have been thanklessly volunteering for many years and they have borne witness to the disagreements between the various political/editorial factions within KPFA.  These are friends, who’ve been involved for decades in the free speech radio KPFA community, and whom your author has known since at least 2007.  And thanks to Project Censored, tonight’s event featured almost as many younger people as it did elder people.  So, that’s an encouraging sign to see that the free speech radio community will be carried on by generations, which came after the Berkeley Free Speech Movement of the 1960s.  Too often, these free speech radio events seem to, either, only interest the elders, who lived through the 1960s, or somehow only they seem to hear about them.

[5]  Although, the audience did thin out quite a bit at the end of Dr. Ralph Nader’s speech before the Q&A (question-and-answer period at the end).