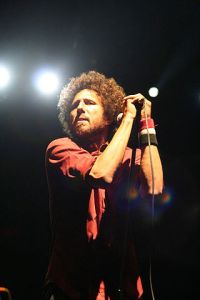 LUMPENPROLETARIAT—”C.I.A. (Criminals in Action)” with KRS-One and The Last Emperor, from Lyricist Lounge, Volume One compilation and remixed on 12″ vinyl single (reissued in 2002), (1999).

KRS-One is an all-time favourite.  When I first heard the, now, classic recording by Boogie Down Productions, “My Philosophy” it blew my mind.  Here, KRS raps:

When they flooded the streets with crack cocaine
I was like Noah; now they lower ‘cos the whole Cold War is over
Communism fell to the dollars; you were grabbin’ it
All the assault and batterin’ in the name of intelligence gatherin’

As free market capitalism and technology expands
The third world’s fertile soil becomes a desert wasteland
So it takes bands to, demand the, government provide answers
when Lady Liberty has me Bewitched like Samantha
And poverty is one of the most malignant forms of cancer
to all my Black Magic romancers and acid rain dancers
Develop close ties like Jerry Seinfeld and George Costanza
We fear no man and throw jams that attack counterintelligence programs

[Zack de la Rocha]
This voice shatters the calm of the day, like an alarm
To wake up badder youth, and take up arms
Cause more is necessary than vocabulary war
Cause the toxic rock imports, gettin on your door
C.I.A. I see ya later, cause your time is comin soon
I flip the shit like, Pacino and it’s your Dog Day Afternoon
Attica Attica, drug agents your bring your static-a
My alphabet will slash that neck and flip you, automatica
Dramatic, like Ali Shaheed Muhammed brought the vibe
I bring the sun at Red Dawn to pull the thoughts of Franz Fanon
So stand at attention, devil dirge
You never survive choosin sides against the wretched of the earth
The infiltrator, tribe intoxicator, people incarcerator
Liberation movement annihilator
We got you clocked pushin rocks and it fail
We got brothers troopin subways like the Ho Chi Manh trail
We got the truth data, Last Emperor, KRS and
history manifested, tomorrow next lesson

[The Last Emperor]
As free market capitalism and technology expands
The third world’s fertile soil becomes a desert wasteland
So it takes bands to, demand the, government provide answers
when Lady Liberty has me Bewitched like Samantha
And poverty is one of the most malignant forms of cancer
to all my Black Magic romancers and acid rain dancers
Develop close ties like Jerry Seinfeld and George Costanza
We fear no man and throw jams that attack counterintelligence programs
Exciting like the epic adventures of Conan (hah!)
I colonize minds like Zaire by the Belgians
Now what the hell is the problem with this system and what it sells us
I bring ancient relics like Wyclef did to Zealots
I saw an Iron Curtain called hip-hop and got it open like Boris Yeltsin
Whirlwind, tornadoes, in the rain forest if you say so (whosssshhh)
KRS and The Last Emperor like the Green Hornet and Kato
Zach de la Rocha brings the enraged flow, but all three drop science
and become the most powerful alliance since NATO

[KRS-One]
Need I say the C.I.A. be Criminals In Action
Cocaine crack unpackin, high surveillance trackin
Prominant blacks and whites givin orders for mass slaughters
I want all my daughters to be like Maxine Waters
When they flooded the streets with crack cocaine
I was like Noah, now they lower cause the whole cold war is over
Communism fell to the dollars you were grabbin it
All the assault and batterin in the name of intelligence gatherin?
Now it’s karma you battlin, a losin fight
I chose the mic to recite ignite light in the night, aight?
We should beat em, President Clinton should delete em
it’s not hard, the C.I.A. simply has no more job
Oh my Goddess, mother, you can fix this
We rock over mixes not six six sixes
Yo this is, the message, to all that can hear it
If you got secret information now’s the time to share it
Call your Congresswoman, your senator, your mayor
It’s time for all the scholars to unite with all the players
Rearrangin, see times are definitely changin G
They used to tap the phone, now they tappin while you pagin me
It’s crazy B, yet it’s plain to see, who the enemy
Who’s left the NRA? The ATF, the AMA?
Okay okay, it’s all irrelevant, cause in the new millenium
there’ll be no Central Intelligence

KRS-One is an all-time favourite for many of us.  Of course, with this album cover, invoking the legendary imagery of Malcolm X in the throes of an evil society caving in on him, whilst his comrades increasingly betrayed him.  When I first heard this, now, classic recording by Boogie Down Productions, particularly “My Philosophy”, it blew my mind.  And it’s safe to say it changed my life.  Here, KRS raps:

Rap is like a set-up, a lot of games
A lot of suckas with colorful names
I’m so-and-so, I’m this, I’m that
Huh, but they all just wick-wick-wack
I’m not white or red or black
I’m brown from the Boogie Down
Productions, of course our music be thumpin’
Others say they’re bad, but they’re buggin’

This music encouraged many of us toward academia.

“My Philosophy” by Boogie Down Productions

Let’s begin: what, where, why, or when
Will all be explained like instructions to a game
See I’m not insane; in fact, I’m kind of rational
When I be askin’ you, “Who is more dramatical?”
This one or that one, the white one or the black one?
Pick the punk; and I’ll jump up to attack one
KRS-One is just the guy to lead a crew
Right up to your face and dis you

Everyone saw me on the last album cover
Holding a pistol, something far from a lover
Beside my brother, S C O T T
I just laughed ‘cos no one can defeat me
This is lecture number two, ‘My Philosophy’
Number one, was ‘Poetry’; you know it’s me
This is my philosophy; many artists got to learn
I’m not flammable; I don’t burn

So, please stop burnin’, and learn to earn respect
‘Cos that’s just what KR collects
See, what do you expect when you rhyme like a soft punk?
You walk down the street and get jumped
You got to have style and learn to be original
And everybody’s gonna wanna dis you
Like me, we stood up for the South Bronx
And every sucka MC had a response

You think we care? I know that they are on the tip
My posse from the Bronx is thick and we’re real live, we walk correctly
A lot of suckas would like to forget me, but they can’t
‘Cos like a champ, I have got a record of knocking out
The frauds in a second; on the mic, I believe that you should get loose
I haven’t come to tell you I got juice
I just produce, create, innovate on a higher level
I’ll be back, but for now just seckle

I’ll play the nine and you play the target
You all know my name, so I guess I’ll just start it
Or should I say, start this?  I am an artist
Of new concepts at their hardest
Yo, ‘cos I’m a teacher and Scott is a scholar
It ain’t about money ‘cos we all make dollars
That’s why I walk with my head up
When I hear wack rhymes I get fed up

Rap is like a set-up, a lot of games
A lot of suckas with colourful names
I’m so-and-so, I’m this, I’m that
Huh, but they all just wick-wick-wack
I’m not white or red or black
I’m brown from the Boogie Down
Productions, of course our music be thumpin’
Others say they’re bad, but they’re buggin’

Let me tell you somethin’ now about hip hop
About D-Nice, Melodie, and Scott La Rock
I’ll get a pen, a pencil, a marker
Mainly, what I write is for the average New Yorker
Some MCs be talkin’ and talkin’
Tryin’ to show how black people are walkin’
But I don’t walk this way to portray
Or reinforce stereotypes of today

Like all my brothas eat chicken and watermelon
Talk broken English and drug sellin’
See, I’m tellin’ and teachin’ real facts
The way some act in rap is kind of wack
And it lacks creativity and intelligence
But they don’t care ‘cos their company is sellin’ it
It’s my philosophy on the industry
Don’t bother dissin’ me, or even wish that we’d

Soften, dilute, or commercialize all the lyrics
‘Cos it’s about time one of y’all hear it
And hear it first-hand from the intelligent brown man
A vegetarian, no goat or ham
Or chicken or turkey or hamburger
‘Cos to me that’s suicide, self-murder
Let us get back to what we call hip hop
And what it meant to DJ Scott La Rock

How many MCs must get dissed
Before somebody says, don’t fu*# with Kris
This is just one style, out of many
Like a piggy bank, this is one penny
My brother’s name is Kenny, that’s Kenny Parker
My other brother I.C.U. is much darker
Boogie Down Productions is made up of teachers
The lecture is conducted from the mic into the speaker

Who gets weaker? The king or the teacher?
It’s not about a salary; it’s all about reality
Teachers teach and do the world good
Kings just rule and most are never understood
If you were to rule or govern a certain industry
All inside this room right now would be in misery
No one would get along nor sing a song
‘Cos everyone’d be singing for the king; am I wrong?

So yo, what’s up? It’s me, again
Scott La Rock, KRS, BDP, again
Many people had the nerve
To think that we would end the trend
We’re criminal minded, an album which is only ten
Funky, funky, funky, funky, funky hit records
No more than four minutes and some seconds

The competition checks and checks and keeps checkin’
They take the album, take it home, and start sweatin’
Why? Well, it’s simple, to them it’s kind of vital
To take KRS-One’s title
To them I’m like an idol, some type of entity
In everybody’s rhyme, they wanna mention me?
Or, rather, mention us, me and Scott La Rock
But they can get bust, get robbed, get dropped

I don’t play around, nor do I eff around
And you can tell by the bodies, that are left around
When some clown jumps up to get beat down
Broken down to his very last compound
See how it sounds? A little unrational
A lot of MCs like to use the word dramatical
Fresh for ’88, you suckas