LUMPENPROLETARIAT—On this week’s episode of free speech radio’s Project Censored, Dr. Peter Phillips and Mickey Huff, M.A. spoke with Medea Benjamin, M.P.H. of Code Pink and Global Exchange on the USA’s insidious relationship with Saudi Arabia, which Medea Benjamin explained, has been supported and abetted by twelve consecutive U.S. presidents.  The Project Censored theme for the broadcast is social justice and community activism.  But, of course, with Medea Benjamin working on a new project on Saudi Arabia, her focus was mainly preoccupied with discussing that totalitarian nation.  Listen (or download) here. [1] 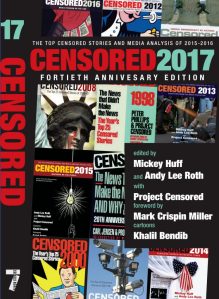 “Today, we continue our theme on social justice and community activism for this Second Annual Social Justice Week at Sonoma State University in northern California.  On today’s show, we have two wonderful guests.  Later in the hour, we’ll be joined by Arnie Gunderson about ongoing concerns of radioactive contamination in Fukushima.  But, first, we are joined [via telephone] by activist Medea Benjamin of Code Pink to discuss the importance of community activism, working toward social justice.  And, here, is Peter to introduce Medea to you.  Peter?”

DR. PETER PHILLIPS:  “Medea Benjamin is the co-founder of the women-led peace group Code Pink.  She’s also co-founder of the human rights group Global Exchange.  Medea has authored [at least] eight books, including Drone Warfare: Killing by Remote Control [2012]. And she has been an advocate for social justice for over 40 years.  Medea, welcome.”  (c. 2:32)

MEDEA BENJAMIN:  “Thank you so much, Peter and Mickey.”

DR. PETER PHILLIPS:  “You’re a keynote speaker for the Social Justice Week at Sonoma State University.  And our theme is the importance of community activism and social justice at a grassroots level.  Could you talk a little bit about what that means in your life?  [chuckles]”

MEDEA BENJAMIN:  “Well, I guess it means, when you see what happens in the world, you don’t just turn your head and go on and do something, that has nothing to do with the world’s problems, but you take some of ’em and work on them.  I often have been likening it to just reading the newspaper and not being so cynical as saying:  Oh, another hospital blown up here.  Another war going on here.  Another water system, that has been toxic for people there.  But that you really do get upset about these things, and you join, and you start working on ones, that really speak to you.”

MEDEA BENJAMIN:  “I’m working, now, on what I consider the elephant in the room around foreign policy.  And that’s Saudi Arabia.  Here, the U.S. is involved in all kinds of wars in the Middle East, that most Americans can’t even really out because it is, indeed, very complicated.  And they know we have this ally, Israel, that, somehow, people have been convinced to think is a democratic country.  And, then, there is Saudi Arabia, the greatest U.S. Arab ally in the region, that we have been allied with since its founding in 1932.  Twelve presidents, Democratic and Republican, have all kept up this relationship.  And it’s just a disaster.  (c. 4:22)

“So, that’s what I’m focusing on right now—is how do we really build the movement to challenge the U.S.-Saudi relationship.” [3]

MICKEY HUFF:  “Medea Benjamin, do you see any headway on that?  You just gave a quick snapshot of a history of, sort of, the problem, there, of how the U.S. allies in the region, particularly with Saudi Arabia, which is quite troublesome.  Are you seeing any headway when you’re going around and speaking?  Are you seeing any cracks in that kind of alliance?  What is your view on that, as far as where we’re heading?” [4]

MEDEA BENJAMIN:  “Give us a little time, Mickey, since we just started about two weeks ago. [chuckles softly, kindly]”

MICKEY HUFF:  “Well, yeah, you’re up against a big timeline—”

MICKEY HUFF:  “—as far as decades and decades of that go.  But this is, certainly, a heartening endeavor.”

MEDEA BENJAMIN:  “But it’s a good time to do it because so many things are changing in the region and internally.  The U.S. used to be very dependent on Saudi Arabia for oil.  Now, we only get ten percent of our oil from Saudi Arabia, which does have its negative flipside because they’ve made their imported oil so cheap that they’ve destroyed a lot of the fracking industry, which is a good thing.  But, anyway, that’s a complication we can get into.

“So, we’re not dependent on them for oil anymore.  Perhaps more dependent is on weapons sales, as they are the number one purchaser of U.S. weapons—massive amounts of weapons.  In fact, since 2010, the deals going to almost a hundred billion dollars worth of weapons.  And, unfortunately, the U.S. media has not been covering the Saudi war in Yemen, where bombings are occurring every single day with U.S. weapons, that are destroying hospitals and marketplaces.  In fact, a marketplace was hit and over 140 people died.  We are directly related to what’s going on there.  In fact, there’s even U.S. cluster bombs, weapons that the international community has banned, that are being produced in this country, are being sold to the Saudis.

“There’s a lot of things, that we have to focus on.  We’re teaming up with people in Europe, who are starting to, not only build, but actually having some success in banning weapons sales to Saudi Arabia from their countries. (c. 6:40)

[2]  A useful documentary, which corroborates this observation is the Frontline report from March 29, 2016 called Saudi Arabia Uncovered.  Because of the censorship in Saudi Arabia, the foreign filmmakers had to enter the country under false pretences by setting up a fake cyber-security company to attend a trade show.  They had to record what they could in Saudi Arabia using only hidden cameras.  But, soon, they had to abruptly flee the totalitarian nation in a panic to avoid being discovered and arrested.

It is currently available on Netflix or PBS (circa Fall/Winter 2016).  View PBS archive here.

[3]  As people of conscience, we agree with Medea Benjamin’s concerns and fact-filled assessment of the totalitarian Saudi Arabia, which does project its extreme Wahhabist religion ideology.  Yes, we need to “build the movement to really challenge the U.S.-Saudi relationship”, as she says.

The problem many of us have with Medea Benjamin, however, is that, coming from liberals, like her, build the movement is usually code for Democratic Party apologism.  The message transmitted to people of conscience, activists, progressives, and such is this:  Oppose any injustice in the world, but never abandon your loyalty to the Democratic Party, even if it perpetuates U.S. imperialism and serves the interests of capital as well as the Republican Party.

No, despite the volumes of evidence we have to demonstrate the ethical, moral, and political bankruptcy of the Democratic Party (not to mention the Republican Party), liberals continue with their Democrat apologism, however subtle the dog-whistle politics.  They may say their being “non-partisan”.  But how can anyone, who cares about politics, who is a registered voter, not be partisan?  As Howard Zinn has famously declared, you can’t be neutral on a moving train.  Even if Medea Benjamin is a Green, and not a Democrat, her tendency to be uncritical about the Democratic Party serves the interests of the two-party dictatorship, hurts the interests of political alternatives, helps keep progressives corralled within the two-party dictatorship, prevents progressives from imaging political alternatives or useful electoral reforms, such as ranked-choice voting and proportional representation in Congress.  If Medea Benjamin were truly critical about the Democratic Party, as vociferously, as, say, Chris Hedges and Dr. Cornel West, who have finally seen the light, which they didn’t in 2008, she might lose some of her fans, she might lose some of her fame, but she would be much more honest and less contradictory. But, at least, she would be on the correct side of history.

[4]  Mickey Huff is supremely respectful.  Your author is working on being the same.  But, sometimes, honestly, it seems a little rudeness is in order, as Medea Benjamin knows with her ambush tactics to draw attention to important causes.  But it’s easy for a progressive to target a Republican, at least philosophically-speaking.  But the difficulty comes when dealing with our colleagues on the left.  Sometimes, we don’t know how to disagree respectfully.  And, sometimes, public intellectuals hide behind the politics of politeness.

But it seems Huff was implying to Benjamin in his question that liberals and progressives have been trying to build that movement for many years.  But the Democratic Party seems as unresponsive as ever to its constituency, to the working classes.  But as long as public intellectuals and celebrity intellectuals continue to provide rhetorical cover for the Democratic Party, it’s hard to imagine that we’ll ever build a critical mass opposition to the two-party dictatorship in our lifetimes.  If that’s the case, then we will never build the movement, for which Medea Benjamin is calling because what’s required is political power, which, as Macchiavelli has long argued, only comes from laws and force.  And, since we confine ourselves to laws, that means taking political power through the political party form.  And that requires being honest about the importance of political diversity beyond a two-party political cartel, and about the role of the Democratic Party in relation to social and economic justice, which Medea Benjamin rarely is.