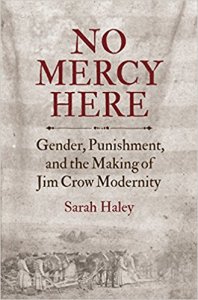 LUMPENPROLETARIAT—On this week’s edition of free speech radio’s Women’s Magazine, co-host Lisa Dettmer presented audio from a UC Berkeley lecture given by Professor of Gender Studies and African-American Studies (at UCLA), Dr. Sarah Haley, author of No Mercy Here: Gender, Punishment, and the Making of Jim Crow Modernity (2016).  Dr. Haley delivered this presentation on her book, No Mercy Here, at an event organized by the Center for Race & Gender at UC Berkeley.  Listen (and/or download) here. [1]

LISA DETTMER:  “Welcome to Women’s Magazine.  I am Lisa Dettmer.  And I will be your host today.

“As women protesting racial violence and state repression in the last few years have repeatedly pointed out, the deaths of Rekia Boyd, Renisha McBride, and even Sandra Bland have garnered far less attention than those of Trayvon Martin, Eric Garner, and Michael Brown.  (c. 1:17)

“The mainstream account of mass incarceration tends to see it fundamentally as a male problem.  All the while, the incarceration of women has risen at a rate fifty percent higher than that of men since 1980, according to The Sentencing Project.  And, of course, a large number of those are women of colour.  Black feminists, like Kimberlé Crenshaw, or writer Monique Morris in her book Pushout: The Criminalization of Black Girls In School, and activists supporting Melissa Alexander and other women, have attempted to correct the narrative around state violence against people of colour by including the story of black women.

“One such book, that does this is the new book, No Mercy Here: Gender, Punishment, and the Making of Jim Crow Modernity by Professor Sarah Haley, Assistant Professor of Gender Studies and African American Studies at the University of California at Los Angeles.

“No Mercy is a landmark history of black women’s imprisonment in the South in the 19th and 20th century and recovers stories of captivity and punishment of black women to demonstrate how the system of incarceration was crucial to organising the logics of gender and race in constructing Jim Crow modernity.  Haley depicts the imprisonment of black women in the late 19th and early 20th centuries and the wrenching forms of gendered racial terror and heinous structures of economic exploitation.

“No Mercy Here, however, goes a step further and argues that the destruction of black womanhood by the carceral system was a necessary component in the construction of white womanhood.  Drawing upon black feminist criticism and a diverse array of archival materials, Sarah Haley uncovers imprisoned women’s brutalisation in local, county, and state convict labour system, while also illuminating the prisoners’ active resistance and sabotage, challenging ideologies of racial capitalism and patriarchy and offering alternative conceptions of social and political life.  (c. 3:14)

“No Mercy Here follows the subterranean river of resisting coursing beneath Jim Crow Georgia, consisting of sabotage, flight, and refusal of work.  And Haley argues it is also present in songs of black women’s blues, that addressed the carceral experience, and where the singers evince utter disrespect for the authority of the law and reclaim willful subjectivities, stripped from them by their jailers.  You can hear this in the Bessie Smith song, ‘Sing Sing [Prison] Blues’.  http://of%20song%20excerpt

“Professor Haley spoke recently about her book, No Mercy, here [in Berkeley, California] at an event organised by the Center for Race & Gender at UC Berkeley.  Here is that talk.”