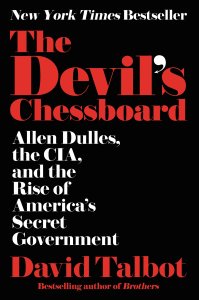 LUMPENPROLETARIAT—Recently, we documented the Second Annual Social Justice Week events at Sonoma State University.  Probably one of the standout presentations was given by author, journalist, and historian David Talbot.  Talbot discussed his most recent book, The Devil’s Chessboard: Allen Dulles, the CIA, and the Rise of America’s Secret Government, amongst other topics relevant to socioeconomic justice.  Listen (or download) here. [1]

“On today’s programme, we’ll share with you excerpts of a recent speech from author, journalist, and historian David Talbot.  He recently spoke at Social Justice Week at Sonoma State University in northern California.  And he talked about his latest book, The Devil’s Chessboard: Allen Dulles, the CIA, and the Rise of America’s Secret Government.  Please stay with us.”

“Today on the programme, we’ll be hearing from author, journalist, and historian David Talbot.  Talbot is author of The New York Times best-seller, Brothers: The Hidden History of the Kennedy Years and the acclaimed national bestseller, Season of the Witch: Enchantment, Terror and Deliverance In the City of Love.  He is founder and former chief editor of Salon, former senior editor at Mother Jones.  He was also a features editor at The Examiner.  He has written for The New Yorker, Rolling Stone, Time, The Guardian.  And his latest book, The Devil’s Chessboard: Allen Dulles, the CIA, and the Rise of America’s Secret Government was the subject of a speech, that he gave March 21st [2016] at Sonoma State University.  I was host and MC for the evening.  And, now, we share excerpts of David Talbot’s talk with you.”  (c. 2:10)

DAVID TALBOT:  “We live in a lawless age.  And I’m not speaking here of crime in the street, but crime in the suites.  Top Washington officials, from the president on down, order remote-controlled assassinations with the barest fig leaf or legal review.  Are these human targets guilty or innocent?  We’ll never know.  These decisions to spare or take human life, including the lives sometimes of American citizens are conducted in stark, chamber-like secrecy.

“Since 9/11, our leaders have been playing God, ordering assassinations at will, torture, mind control experimentation, massive snooping on private citizens and foreign officials all over the globe, suspending our civil liberties, and expanding the War On Terror wherever and whenever our all-powerful national security state decides it must intrude.  (c. 3:07)

“Meanwhile, as Washington extends its ominous shadow into every corner of the world and every corner of our lives, Wall Street continues to amass wealth and impoverish the nation in a frenzy of looting with virtually no government oversight. [2]  Since, as Senator Bernie Sanders has repeatedly pointed out, Wall Street owns Washington.

“Recently, a Doctors Without Borders hospital in Afghanistan was subjected to withering U.S.-led bombardment for nearly an hour, despite the tragic pleas, that the medical staff at the hospital communicated to their American military contacts throughout this terrible ordeal.  This fiery assault, which took the lives of doctors, nurses, and patients was clearly intentional, as Doctors Without Borders later charged.  The hospital’s crime?  Treating wounded Taliban fighters, as required under international law.  Doctors Without Borders called the hospital bombing a war crime, which it certainly was, and demanded an independent investigation.

“But, in a pattern, that is all-too familiar, the Pentagon simply expressed its regrets, promised to conduct its own internal inquiry.  And, there, the matter will certainly languish until a bland official statement is released sometime in the near future informing us that a mid-level military fall guy has been reprimanded and the case closed.

“When it comes to the top lawbreakers in our country, there is no law.  There is no public accountability, no truth, no consequences.  And, when those at the top, escape justice, when there is no rule of law, there can be no social justice.

“President Obama came into office criticising the excesses of Bush’s War On Terror.  But no sooner did he move into the Oval Office, did he tell the American people that we must look forward, not back.  And, so, with no public reckoning for the Bush era, the Obama administration was free to commit its own violations of international law and human rights, vastly expanding the government’s drone killing programme, its Orwellian surveillance system, and its war on whistleblowers, like Ed Snowden, a young man, whose inspiring heroism is one of the few bright lights of our dark age.

[(c. 18:28) end of David Talbot speech, quite brief, which suggests the speech was edited and truncated, although it quite sounds unedited; but Mickey Huff did introduce the speech by saying he’d broadcast “excerpts”.]

[2]  See various resources on this topic, including: