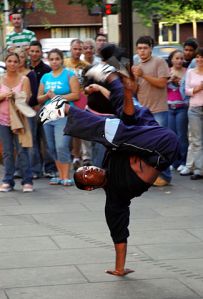 LUMPENPROLETARIAT—Check out this new documentary series on Netflix entitled Hip-Hop Evolution, the first two episodes of which debuted at the Toronto film festival Hot Docs on May 5, 2016.  Then, all four episodes were broadcast on HBO.  Now, those of us without premium cable, but with access to the internet and a relatively cheap Netflix account, can watch all four episodes of Season 1.  Since this documentary series was on HBO priorly, one may wonder how Netflix can call it a “Netflix Original”.  Sepa la chingada.  But, perhaps, future seasons will follow.

[Image of breakdancer at Faneuil Hall, Sunday, September 11, 2005 by Chris Kirkman from Chapel Hill, North Carolina, United States – Even he can’t believe it, (Creative Commons BY 2.0)]