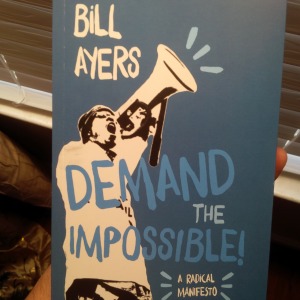 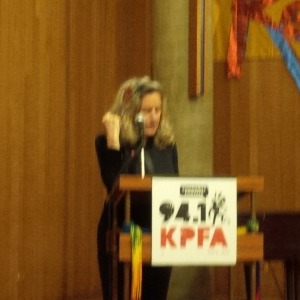 [Audience Q&A:  Perhaps, we avoided the most controversial and difficult questions, but we were respectful.  Or, perhaps, moderator Kathryn Horsley, skipped such questions.  It’s doubtful.  She seems to have done a fair job of tallying repeat questions.  The question of whether or not to reform the Democrat Party from within, or seek to promote and build alternative parties, came up in at least six audience questions, according to the moderator.  My question was very clearly written, although the moderator was filtering the questions.  But my question, also asked by others, made it through in a watered down form.  Do you subscribe to a reform-the-Democratic Party from within ideology?  Or do you support a multi-party system and the democratic right of alternative political parties to exist and be included?  But Bill Ayers seemed to dodge the question.  I was hoping he might admit, proudly, who he voted for and why.  Or if he didn’t vote, why not.  But this area of democracy seems to be a weak one in our American public discourse.] 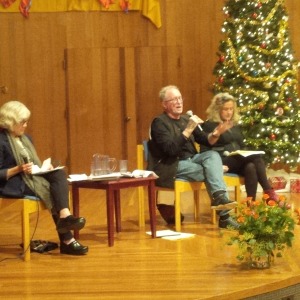 [Bernardine Dohrn seemed sincere when she said that electoral politics weren’t their area of expertise.  And, of course, we’ve rarely if ever heard Bernardine Dohrn on free speech radio, or on Democracy Now!.  Bill Ayers, on the other hand, we do hear.  This lends itself to much greater allowances for Bernardine, in terms of dodging the question of assessing the antidemocratic nature of the Democratic Party and the two-party dictatorship.  Whereas, for Bill Ayers, on the other hand, who has been on the free speech airwaves and websites, we tend to be far more critical.  We, somehow, would have expected a much stronger critique of the antidemocratic two-party system as well as the antidemocratic Democratic Party.  The fact that we haven’t, when the argument seems such a simple one, has always made Bill Ayers seem like a Democrat apologist.  That’s alright.  I just wish he would’ve proclaimed that proudly.  But, somehow, we succumb to notions of secret voting and occulted political preferences.  For Bill Ayers to argue that political science and/or electoral politics is not his area of expertise, when he is often interviewed on broadcast media to comment as an expert, is a bit disingenuous.  Yes, Bill Ayers’ area of expertise is education.  But imagine if Noam Chomsky, when asked about politics, simply said, that’s not my area of expertise; I can only discuss linguistics.  That would be absurd.  But, interestingly, it seems Noam Chomsky is another subtle Democrat Party apologist.  We might be wrong. But that’s not likely in this case, after years of observation.  Some of our sharpest critics of U.S. imperialism on the American left, somehow, avoid critiquing the anti-democratic two-party dictatorship.  Too many of our friends on the left simply shrug and pretend we can simply ignore electoral politics, ‘focus on local issues’, and on ‘pushing the Democrats to do right’, which they never do.] 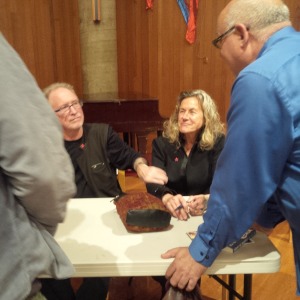 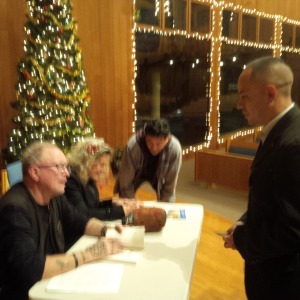 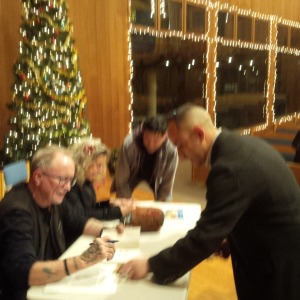 [1] GONZO:  Wow.  The word fell from my lips, seated in the second row, astonished at the sight of Bernardine Dohrn in the flesh.  “Yeah, wow,” said Bill Ayers , passingly, perceptively, sympathetically, as he followed behind Bernardine, as they took to the stage.

Bernardine Dohrn’s voice is one of the most honest American voices we’ve heard from the fabled 1960s generation.  And she survived, along with her hu the repressive state apparatus

KPFA presented, and Bernardine Dohrn and Bill Ayers delivered, a memorable address before a capacity audience this evening at St. John’s Presbyterian Church at 2727 College Avenue in Berkeley, California.  The sold out event was a KPFA benefit.  Lumpenproletariat was present to document the proceedings for the people.

Bernardine Dohrn has become, somehow, a mythical figure in many of our minds.  Perhaps, for good reasons.  Perhaps, for bad reasons.  Perhaps, you’ve seen The Weather Underground directed by Sam Green and Bill Siegel in 2012.  But, in any event, for many of us, she still represents the unbridled indignation, which few besides political prisoners and exterminated political leaders have paralleled.  Bernardine Dohrn, along with her longtime partner Bill Ayers, survived the revolutionary ’60s and lived to tell the tale.  And, of course, they went on to enjoy the family life.

Bernardine Dohrn and Bill Ayers are American heroes, who stood up against the worst abuses of our government.  We should all be proud of their contributions toward a democratic society.  Speak the truth.  So, let us stop talkin’ falsely now, the hour is getting late…

But, of course, their story didn’t end in the ’60s.  They both also went on to contribute, among other things, in the fields of education.

Free speech radio has organised this KPFA benefit, hosted by Kathryn Horsley.  This benefit event is also promoting Bill Ayers’ new book, Demand the Impossible: A Radical Manifesto (2016, Haymarket Books).  At the end of the event, organisers allowed for a Q&A.