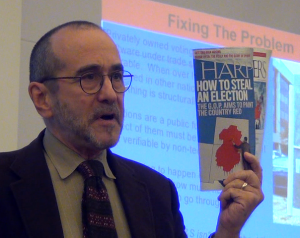 LUMPENPROLETARIAT—On this week’s episode of Project Censored, professor of Media, Culture, and Communication at NYU Dr. Mark Crispin Miller discussed the state of the American free press, which has come to be dominated by corrupt state and corporate interests, including the CIA and NSA, which often distort and even outright lie about news events, keeping the American public in the dark.  Listen (and/or download) here. [1]

PROJECT CENSORED—[12 AUG 2016]  “Welcome to the Project Censored show on Pacifica Radio.  I’m Mickey Huff with Peter Phillips.  On today’s programme:  Our free press as a clear and present danger.

“We are joined for the hour by professor or media, culture, and communication at New York University, noted author and media critic Mark Crispin Miller.

“Please stay with us for an hour discussion about media, censorship, propaganda, and more with Mark Crispin Miller.  (c. 0:51)

“Today’s programme, we’re joined by Mark Crispin Miller.  And we’re going to be talking about our free press as a clear and present danger.

“And here is Peter to introduce Mark to you.  Peter?”

DR. PETER PHILLIPS:  “Mark Crispin Miller is a professor of Media, Culture, and Communications at New York University, a publisher of news from the underground at MarkCrispinMiller.com.  His books include:  Boxed In: The Culture of TV; Observations on a National Disorder; Fooled Again: The Real Case for Electoral Reform.

DR. MARK CRISPIN MILLER:  “Thanks, Peter.  It’s great to be with you guys again.”

DR. PETER PHILLIPS:  “One of the things you’re doing this year is writing the foreword to our 40th Anniversary book, Censored 2017, which we’re really honoured that you’re doing that.  And, if you’d really talk about the transformation of corporate media, certainly over the last 40 years and even more recently.

“Could you give us a thumbnail [sketch] of what you’re saying?”

DR. MARK CRISPIN MILLER:  “Let me say, first, that I was really honoured that you guys asked me to write the foreword to this momentous publication.  You know.

“Project Censored has been doing such righteous and necessary work for so long.  I was really please to be able to, kind of, lend my voice as a way to help sell the book and get the issues out there into people’s minds.

“So, what I did was—and I took this opportunity to make a large and convincing statement about what happened to this nation’s so-called free press over the last half century or so.

“And it is, really, kind of an alarming situation.  One of the main reasons why I jumped at the chance to take this assignment on was that I’ve had the feeling for a while now that there’s something alien about the news, that we get day in and day out.  (c. 3:01)

“There’s something unfamiliar to me.  And I mean I’m studying the press in this country for decades, really, since around 1980 or so.  And I’ve seen many, kind of, mind-boggling propaganda drives.  I went through many moments when the whole press seemed to be unanimously pushing some big lie or another.  Usually, this has been in times of war.  Right?  The invasion of Granada.  The invasion of Panama.  Desert Storm.  You know?  Big time.

“So, that, in itself, is nothing new.  I mean it’s really been going on since World War I off and on.

“But, over the last several years or so, I’ve really often had this uncanny feeling about the mendacity and the irrationality and the belligerence of our free press.  It’s kind of a breathtaking experience.  (c. 3:55)

“If I could just address, for a minute, historically, it got me thinking again about the experience of American reporters covering Hitler‘s Germany before the outbreak of World War II.

“I went back and I looked at William L. Shirer‘s classic, Berlin Diary.  You know?  He was covering Hitler‘s Germany for CBS Radio.  And he kept a diary with the conscious intention of publishing it after he was eventually thrown out of the country, as he knew he would be, in order to tell the truth, the truth he couldn’t really tell on the air from Berlin because of Goebbel‘s censors and so on.

“And, at several points in the Berlin Diary, he marvels at how completely misled the German people had been by the unanimous deceptions put across by the German press.  And he talked, you know, specifically along those lines about the buildup to the invasion of Poland, for example.  When all the newspapers were screaming about Polish atrocities against Germany and Polish aggression and the need to defend itself against Polish aggression, he was amazed by this because he understood that everybody outside of Germany knew that it was precisely the opposite, that it was exactly the other way around.  (c. 5:19)

“What I’m tryin’ to tell you guys is that I took this opportunity to write the foreword as a way to get across that something really, really wrong is going on here, that our press is doing the very opposite of what it was supposed to do, according to the framers and the authors of the First Amendment.

MICKEY HUFF, M.A.:  “Mark Crispin Miller, just using a couple of the examples, that you brought up, we’re in the midst of a seemingly endless campaign process here in the Republican National Convention and the Democratic National Convention.  This is really, in many ways, a triumph of spectacle.  And it’s pretty amazing, the lack of in-depth reporting, that’s going on.

“And the thesis, that I’m hearing you outline is you’re talking about what we refer to as our free press—and it’s as if the outliers are the actual intrepid journalists and, systemically, what we have is top-down managed news propaganda, bread-and-circus kind of worship going on.  It’s really of epic proportions.  And it also sounds like you’ve been saying: In the last 40 years, that you’ve been studying this, are you saying that it seems to be worse now?”  (c. 7:05)

“We’re speaking with Mark Crispin Miller for the hour today.  He is a media scholar at New York University.  He is the author of numerous books on media issues, and also of the foreword for Censored 2017.

“Mark Crispin Miller, just before the break, and talking about propaganda, I know that oft we’ll hear cries from critics saying that: Well, you can’t compare anything to the Nazis, etcetera, etcetera.

“And you were also talking a little bit about the PR issues and, sort of, outsourcing of that from government.  And Peter had brought up PR.  And, recently, you sat down with journalist and, certainly, friend of Project Censored Abby Martin on The Empire Files.  And you all did a fantastic programme on Eddie Bernays.  [SNIP]