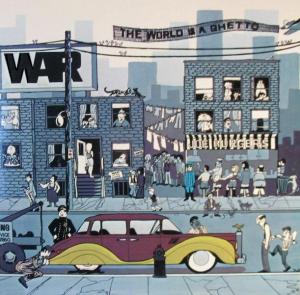 LUMPENPROLETARIAT—Life outside the green zone, with the march of time, brings deproletarianisation: One hundred workers, but only eighty jobs being offered by the capitalist owners of the means of production.  Yesterday, it was ninety.  What’s next?  Human emancipation or incarceration?  The choice is yours, my friends.

The World Is a Ghetto is the fifth album by the band War, released in late 1972 on United Artists Records.

In 2012, this classic album from the Southern California hoods, where brown and black lowriders were comrades, was re-released on CD in a 40th anniversary expanded edition with four previously unreleased bonus tracks.

“I knew we met each other this morning for a reason
Thinking, talking, we’ve worked out our problems
Looked like we should have better days in front
Just because we took our time to think and talk
For a much better understanding

As I sit in my four cornered room…

[image “War The World Is a Ghetto” by Source. Licensed under Fair use via Wikipedia.]