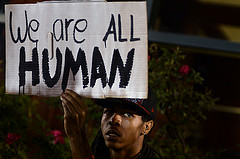 LUMPENPROLETARIAT—Walter Scott, who was slain by police in broad daylight earlier this month, has made the national news headlines again.  Today, the nation’s attention has been called to Walter Scott’s family, as they gathered in North Charleston, South Carolina, on Saturday (11 APR 2015) for his funeral.  Meanwhile, the informed nation reflects upon the increasingly visible persistence of extrajudicial killings of unarmed citizens by cops, who seem to be above the law, when, in fact, as officers of the peace, must be held to even stricter standards of care than the duty of care already expected of civilians.

As influential American linguist, philosopher, cognitive scientist, logician, political commentator, social justice activist, anarcho-syndicalist advocate, and political commentator Noam Chomsky has long argued, our nation, like most advanced nations, is drifting towards fascism.  Perhaps, he would update his previous position to say we have arrived, in the USA, at a state of fascism already, as police kill with impunity.  We will follow this story, over time, and compile news and information related to this extrajudicial killing by cops.

DEMOCRACRY NOW!—(8 APR 2015) A white South Carolina police officer has been charged with murder after a video showed him shooting an apparently unarmed African-American man who was running away. The killing happened Saturday morning after North Charleston police officer Michael Slager stopped Walter Scott for a broken brake light. On the video, Slager is seen shooting at Scott eight times as he tries to flee. The North Charleston Police Department had initially defended Slager after he said he feared for his life and claimed Scott had taken his taser weapon. But the video shows Slager shot Scott in the back at a distance of about 15 feet. The video also appears to capture Slager planting an object next to Scott — possibly the taser gun. The video does not appear to show Scott in possession of the officer’s stun gun at any time. We are joined by longtime South Carolina civil rights activist Kevin Alexander Gray, editor of the book “Killing Trayvons: An Anthology of American Violence.”

DEMOCRACRY NOW!—(13 APR 2015) Hundreds of people gathered in North Charleston, South Carolina, on Saturday for the funeral of Walter Scott, the black man fatally shot in the back by police officer Michael Slager.

Carla Justice: “It’s a senseless tragedy. You know, it’s something that could have been avoided. I know for a fact that cops are taught at the academy, when somebody runs away from you, you do not shoot them, unless somebody else’s life is in jeopardy. So, looking at the video, it was clearly — the officer was wrong. At the same time, I lift his family up, I lift him up in prayer, as well as the Scotts. It’s just a tragedy.”