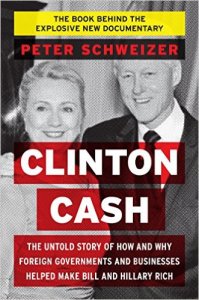 LUMPENPROLETARIAT—If you’ve been paying somewhat close attention to news headlines in recent years, then you would have been informed of various examples of the exorbitant speaking fees Hillary Clinton has commanded (not to mention Bill‘s).  This makes us wonder whether Hillary Clinton was being paid for her pearls of wisdom, or for political favors or political graft.  Given the obvious conflicts of interest with public officials taking bribes, we welcome those out there connecting the dots for those of us unable (or unwilling) to follow the news headlines very closely.

For example, Clinton Cash, is a new documentary film based on the 2015 book of the same name by author and right-wing political consultant Peter Schweizer.  Clinton Cash is helping American voters (and others) understand why Hillary Rodham Clinton does not deserve anybody’s vote.  (Of course right-wingers are going to come after Hillary hard this election year, but, for the record, Trump doesn’t deserve anybody’s vote either, as must be evident to anyone examining the question from a working class perspective.)  Clinton Cash is a timely documentary film (and book) in one of the most exciting, and corrupted, election seasons in recent memory.

“Clinton Cash, is a feature documentary based on the Peter Schweizer book that the New York Times hailed as ‘The most anticipated and feared book of a presidential cycle.’

“Clinton Cash investigates how Bill and Hillary Clinton went from being ‘dead broke’ after leaving the White House to amassing a net worth of over $150 million, with over $2 billion in donations to their foundation.  This wealth was accumulated during Mrs. Clinton’s tenure as US Secretary of State through lucrative speaking fees and contracts paid for by foreign companies and Clinton Foundation donors.”

THE FREE THOUGHT PROJECT—[1 AUG 2016]  A book hailed by the New York Times as “The most anticipated and feared book of a presidential cycle” has been turned into a full-length documentary, with even MSNBC describing the newly released documentary as “devastating” for the Hillary Clinton presidential campaign.

The feature documentary — Clinton Cash — is adapted from Peter Schweizer’s New York Times best-selling book Clinton Cash: The Untold Story of How and Why Foreign Governments and Businesses Helped Make Bill and Hillary Rich, and has now been posted to YouTube for all to see exactly how the pay-for-play of the Clinton machine works.

Clinton Cash delves into how Bill and Hillary Clinton went from being self-admittedly “dead broke” after leaving the White House to building a personal fortune worth of over $150 million — with over $2 billion in donations coming into their foundation.

Not coincidentally, this newfound wealth was accumulated while Mrs. Clinton was operating as the U.S. Secretary of State. It was primarily gained through lucrative speaking fees and contracts paid for by foreign companies and Clinton Foundation donors – as well as numerous foreign governments with a vested interest in activities the State Department regulates and oversees.

Unsurprisingly, the Clinton campaign has downplayed the revelations exposed in the documentary as “conspiracy theory.” However, these claims seem to hold little weight, as many of the biggest bombshells described in the documentary were investigated and confirmed by left-leaning mainstream media outlets.

Here are at least 11 facts that mainstream media say are true, verified, and accurate from this viral documentary.

[1]  YouTube video by Philly Blunt.  Also see the Free Thought Project, among other sources.  (Thanks to brother RDM for bringing this important documentary film to our attention.)